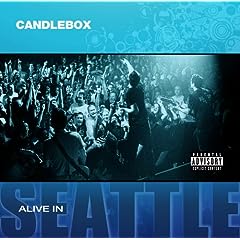 TMRZoo.com is excited to introduce our readers to Brendan Howard. Brendan will be supplementing our eclectic content with CD and DVD music reviews. Being a professional DJ and a purveyor of endless pop culture knowledge Brendan brings his fastidious ears and eyes to the TMR Family.

Candlebox? Sure, I remember those guys. They came out of the Seattle scene just after Nirvana, Pearl Jam, Alice In Chains, and Soundgarden had made glam metal culturally irrelevant and commercially impotent. But let’s not pretend that Candlebox was in the same league as any of those bands. They were just in the same town.

In 1994, Candlebox was riding high with a quadruple-platinum debut album and a monster hit on rock radio (“Far Behind”). For a brief moment in time their semigrunge hooks sounded right at home alongside those iconic Seattle grunge bands and their other contemporaries like Bush and Hole. But while the guys in Candlebox were competent musicians, when you get right down to it they were also anonymous, redundant, and bland. After releasing two more LPs to ever-diminishing sales, the band broke up in 1999 as an attempt to get out of their record deal. Did anyone really notice apart from their most passionate fans?

I have no doubt that those fans were overjoyed in 2006 when the original line-up reunited for a tour, captured in Seattle for your ears and eyes as a CD/DVD combo titled Alive In Seattle. This is essentially a greatest hits collection — in fact, 12 of the 15 songs on The Best Of Candlebox released by their former record company also appear on the CD — and the performances are largely identical to their studio counterparts with a little bit of room to stretch out for solos and audience sing-alongs. Lead singer Kevin Martin is still in good voice (sounding like Chris Cornell with a touch of Geddy Lee) and the rest of Candlebox successfully recreates their sound — only it has been almost 15 years since any of this music sounded even a little bit fresh. The band ingores the evolution of rock music over the past decade in favor of a time-capsule nostalgia show. Martin attempts to fire up the crowd using stage chatter generously peppered with expletives, which probably accounts for the parental advisory sticker on the package. I guess he’s supposed to sound like a bad-ass, but he sounds a lot more like a middle-aged dude trying desperately to sound like a bad-ass so the kids will think he’s cool and dangerous.

The included Alive In Seattle DVD contains the whole concert on video with a sharp-sounding 5.1 audio mix of the whole show plus one additional track (“Rain”) not included on the CD. With bonus features like band interviews and acoustic performances of “Far Behind” and “Cover Me” at a purchase price of $15-20, this is a decent value for a souvenir of the 2006 reunion tour.

This audiovisual keepsake will not do anything to harm the recording legacy of Candlebox, but will it help them acquire younger fans or change the minds of listeners who never gave them much of a chance in their heyday? Probably not. Recommended for existing Candleboxers; all others need not apply.

Music Review: Jack of All Trades by Steve Chizmadia

Jump Back: The Best Of The Rolling Stones