While all the women in America were waiting to see who would be crowned the 2009 American Idol, Adam Lambert or Kris Allen, their husbands and boyfriends were treated to what will probably be their final look at former contestant Katrina Darrell, also known as bikini girl.

In a segment totally created to kill several of the ridiculously long 127 minute show, “Golden Idol” Awards were presented to some of the also-rans of the 2009 American Idol season. The bikini girl was given one of these said awards, and accepted it in her trademark bikini… and sporting a new set of boobs. In a shocking event, Ryan Seacrest even busted a funny joke about “them.”

After Katrina accepted her award, it was time to perform. She started into “Vision of Love” as made famous by Mariah Carey, and was joined, to her surprise, by this year’s new judge Kara DioGuardi… who blew her off the stage. Not only did Kara embarrass her vocally, but she gave her a run for her money at the end of the set as she ripped open her dress to show a black bikini and nice ripped set of abs. See for yourself…

I’ll be honest, AI gave us guys some nice editions of eye candy this season. Here are some of the pics we posted during the 2009 season: 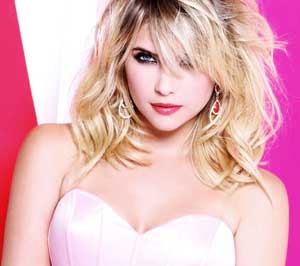 The Kari Ann Peniche/Eric Andrews Sextape Is Back In The News...