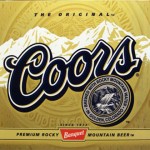 In 1859, prospectors discovered large quantities of gold throughout the Rocky Mountains, and Colorado’s gold rush was on. The search for gold led to the founding of many new communities, including Golden, the birthplace of Coors Banquet.

To honor the 150th anniversary of Colorado’s gold rush, Coors Banquet, which began quenching miners’ thirst in 1873, is giving its fans a chance to strike gold. Through an online sweepstakes running now through Sept. 30, Coors Banquet Facebook fans will have the opportunity to win a one-year supply of Coors Banquet*, a VIP trip for two to the Coors Banquet Brewery, a book about Golden and a live goldfish named Banquet.

“Colorado’s gold rush and the creation of Coors Banquet go hand-in-hand,” said Pete Coors, chairman of MillerCoors. “On this 150th anniversary, we proudly hold up a Coors Banquet to toast the men and women whose hard work and sacrifices led to the formation of Golden and so many other great cities throughout Colorado.”

“Rocky Mountain water and two-row, high-country barley are the most important ingredients in our brewing process” said Keith Villa, MillerCoors brew master. “We’re excited to welcome one of our fans to experience firsthand the care and dedication our team puts into brewing this classic beer.”

Coors Banquet is brewed in the same brewery at the base of the Rocky Mountains where Adolph Coors introduced it in 1873. As legend goes, area miners would throw parties during the 1800s called “banquets.” Coors was the beer of choice for the thirsty miners, and it quickly earned the nickname “banquet beer.”

About MillerCoors
Built on a foundation of great beer brands and more than 288 years of brewing heritage, MillerCoors continues the commitment of its founders to brew the highest quality beers. MillerCoors is the second largest beer company in America, capturing nearly 30 percent of U.S. beer sales. Led by two of the best-selling beers in the industry, MillerCoors has a broad portfolio of highly complementary brands across every major industry segment. Miller Lite is the great tasting beer that established the American light beer category in 1975, and Coors Light is the brand that introduced consumers to refreshment as cold as the Rockies. MillerCoors brews full-calorie beers Coors Banquet and Miller Genuine Draft; and economy brands Miller High Life and Keystone Light. The company also imports Peroni, Grolsch, Pilsner Urquell and Molson Canadian and offers innovative products such as Miller Chill and Sparks. MillerCoors features craft brews from the Jacob Leinenkugel Company, Blue Moon Brewing Company and the Blitz-Weinhard Brewing Company. MillerCoors operates eight major breweries in the U.S., as well as the Leinenkugel’s craft brewery in Chippewa Falls, Wis., and two microbreweries, the Leinenkugel’s 10th Street Brewery in Milwaukee and the Blue Moon Brewing Company at Coors Field in Denver. MillerCoors vision is to become the best beer company in America by driving profitable industry growth. MillerCoors insists on building its brands the right way through brewing quality, responsible marketing and environmental and community involvement. MillerCoors is a joint venture of SABMiller plc and Molson Coors Brewing Company.

Get Your Game On! Dogfish Head Beer Dinner Series