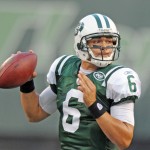 SLIMMEST OF MARGINS: Since 2005, the NFL has played six primetime games in the first two weeks of the season. In 2009, these games have been closer than ever. The margin of victory in the six primetime games to date is only 3.3 points per game (20 total points), by far the slimmest margin in the past five years. All six games were decided by six points or fewer. The next closest margin is 9.2 points per game (2005).

Close games have been a theme for the league overall after two weeks of play, as 15 of the 32 games have been decided by six points or fewer, the second highest total in league history (17 in 2000).

DOWN BUT NOT OUT: History shows that 0-2 teams advance to the playoffs more often than people might think. Since the current playoff format was instituted in 1990, 22 teams started 0-2 and still qualified for the postseason.

Following are the 0-2 teams since 1990 to qualify for the playoffs:

The meetings between multiple-MVP quarterbacks:

EL REY DE NUEVA YORK: With a win on Sunday against Tennessee, New York Jets rookie quarterback MARK SANCHEZ would become the first rookie quarterback to start and win his team’s first three games of a season. Sanchez is only the fourth quarterback in the past 40 years to win his first two starts of a season, and the second in as many years (JOE FLACCO, Baltimore).

The rookie quarterbacks to win their team’s first two games in a season:

The Jets are seeking their second consecutive win against Tennessee, who started 10-0 in 2008 until the Jets earned a 34-13 win at LP Field in Week 12.

UNDRAFTED BUT NOT UNDERAPPRECIATED: Pittsburgh Steelers running back WILLIE PARKER went undrafted out of North Carolina but has rushed for over 5,000 yards, good for third in Steelers’ history. With 84 rushing yards at Cincinnati on Sunday, Parker will move into third-place all-time among undrafted NFL rushers. Pro Football Hall of Famer JOE PERRY is the all-time leader in rushing yards for an undrafted player with 8,378 yards.

The most rushing yards for an undrafted player in NFL history:

ODOM-ETER HITS 7: Cincinnati Bengals defensive end ANTWAN ODOM leads the league in sacks with seven, powered by a two-sack effort on Kickoff Weekend against the Broncos and a franchise-record five-sack output in Green Bay. Odom needs 1.5 sacks on Sunday against the Steelers to set the NFL record for most sacks through a team’s first three games of a season. The Bengals franchise record for sacks in a season is 13 (EDDIE EDWARDS, 1983).

Contest: This Is Your Last Chance To Win The Ultimate Twilight...

Justin Bieber Is Tapped To Replace Ashton Kutcher as Host of...