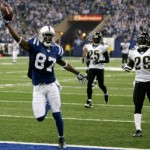 As the NFL approaches the halfway point, it’s still a wide open race to the playoffs.

Sure, the Indianapolis Colts (7-0) and New Orleans Saints (7-0) are in good shape with spotless records. But in the unpredictable NFL, you don’t want to count out anybody. Since 1990, when the current 12-team playoff format was adopted, 47 teams (20.6 percent of the 228 playoff clubs) have advanced to the postseason after starting the season with a .500 or worse record after eight games. So while being undefeated is nice, Colts wide receiver REGGIE WAYNE knows there’s a lot of football left to be played.

“We know that 7-0 guarantees us nothing,” says Wayne. “We’ve gotten farther than this in the past and came out with nothing. We just want to stay dialed in and continue to win games.”

And “continue to win games” is exactly what the Colts have been doing. Indianapolis has now won 16 consecutive regular-season games and can tie the 1933-34 Chicago Bears for the third-longest streak in NFL history with a win this Sunday against the 5-3 Houston Texans.

The 7-0 mark for Colts head coach JIM CALDWELL is the second-best start in the past 80 years for a rookie head coach, trailing only POTSY CLARK (8-0) of the 1931 Portsmouth Spartans. “They’re not handing out anything for whatever record that is,” says Caldwell. “We’ve got a lot of work ahead of us.”

And that work continues this Sunday. Both the Colts and Saints will look to remain unbeaten as part of five key divisional matchups in Week 9:

Some of the headline games in Week 9:

The 4-3 Ravens will visit the 5-2 Bengals in a matchup between two of the top teams in the AFC North. Baltimore is riding high after an impressive 30-7 victory over the previously unbeaten Denver Broncos while the Bengals, who had a bye in Week 8, have won five of their past six games.

“It was a special win,” says Ravens running back RAY RICE after defeating Denver. “It was a game that we needed, especially coming off the bye week. To come out and play all three phases the way we played, that was special.”

In Week 7, the Bengals played, according to offensive coordinator BOB BRATKOWSKI, “our best game of this year.” Cincinnati defeated Chicago 45-10 behind quarterback CARSON PALMER’s five touchdown passes and running back CEDRIC BENSON’s career-high 189 rushing yards. But head coach MARVIN LEWIS is looking forward, not back.

“It’s a new season,” says Lewis, speaking of the games after the bye week. “We have a nine-game schedule and we open with Baltimore.”

Two of the NFL’s hottest clubs will meet at Lucas Oil Stadium this Sunday in a battle of the AFC South’s top teams.

Houston has won three games in a row, including a 31-10 victory at Buffalo last week. The Texans, now 5-3, are two games above .500 for the first time in franchise history.

“This team has grown so much since the day I got here,” says Houston wide receiver ANDRE JOHNSON, who leads the NFL with 697 receiving yards. “I’ve pretty much been through it all here. We’ve come a long way.”

The Colts, who are 7-0 for the fourth time in the past five seasons, begin a stretch that will see them play teams that are a combined 19-11 (.633) over the next four games. That starts this Sunday against the Texans.

“We’re heading into the teeth of our schedule,” says Indianapolis quarterback PEYTON MANNING.

“I couldn’t drop that one,” says Wayne, who ranks second in the NFL behind Houston’s Johnson with 689 receiving yards. “If I had dropped that one, he would have messed with me forever.”

“Philadelphia and Dallas are playing great in all three phases,” says NBC analyst TONY DUNGY. “It’s setting up a big showdown game – with first place in the NFC East on the line – on Sunday night.”

The Cowboys have won three consecutive games and have scored 101 points (33.7 per game) during their recent winning streak. Quarterback TONY ROMO has posted a 100+ passer rating in all three games and wide receiver MILES AUSTIN has recorded 21 catches for 482 yards (160.7 per game) and five touchdowns in the past three – the first three starts of his career. Austin’s 482 receiving yards are the most by a player in his first three starts since 1970.

Last week, the Eagles scored 40 points in a 23-point victory over the New York Giants, the team’s largest margin of victory over the Giants since 1996. In Philadelphia’s five wins this season, the team has averaged 34.4 points per game.

One of the weapons in the high-octane offense is wide receiver-punt returner DE SEAN JACKSON, who has scored six touchdowns of at least 50 yards this year, becoming just the second player in NFL history – Pro Football Hall of Famer ELROY (CRAZYLEGS) HIRSCH (1951) – to score six 50-yard touchdowns in the first seven games of a season.

“I’ve just been put in some great positions to score long touchdowns,” says Jackson. “Whatever we need to do to make it work, that’s what we’re going to do. I want to keep winning, keep making plays and hopefully make it to the Super Bowl.”

The defending champion Steelers, coming off a bye, will look to extend their winning streak to five consecutive games this Monday night at Denver when two division leaders clash.

“There’s a lot of season left and we have some growing to do defensively,” says Pittsburgh defensive coordinator DICK LE BEAU. “I think we have the potential to be a very, very good defense.”

A team that has shown a very, very good defense in 2009 is Denver. The Broncos, who enter the week in first place in the AFC West with a 6-1 mark, rank second in the NFL allowing just 13.7 points per game. Denver will look to rebound after suffering its first loss of the season last week against another AFC North opponent, the Baltimore Ravens.

“You can find out just as much about your team through the adversity of a loss as you can through six wins,” says Broncos head coach JOSH MC DANIELS. “Now we’ve got to get ready to play against a really good team in Pittsburgh.”