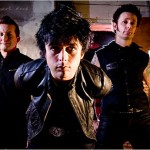 In this classic Green Day performance, the band returns to the stage for the first time since their multi-award winning album, “American Idiot.”

The concert is a live performance of their album, “21st Century Breakdown,” which won the Grammy® this year for Best Rock Album. It was taped in April of 2009 at the recently restored Fox Theatre in Oakland, California and includes exclusive behind the scenes footage and commentary.

Green Day rocks some of their biggest hit in the show including “American Idiot,” “Longview,” and “21 Guns.” “Green Day Live at the Fox Theatre” is just the latest in an all-star line-up of new concerts presented this spring on HDNet.

Additionally, just prior to the Green Day concert at 8:00 p.m. ET, HDNet will present “Ray Johnston Band: Road Diaries,” the moving, eight-part series focusing on the band’s leader Ray Johnston, his surprising NBA career, his courageous battle with cancer, and his new challenge to make it in the music business.

Don’t miss Billie Joe, Mike and Tre as they rock HDNet this Sunday!

About HDNet
HDNet (www.hd.net) is the independent network with unique and provocative content that appeals to men of all ages and is delivered in true high definition.

HDNet is the exclusive, high definition home for popular, original programming, including television’s only HD news feature programs “HDNet World Report,” and the Emmy Award winning “Dan Rather Reports,” featuring legendary journalist Dan Rather. Only HDNet goes beyond the headlines to deliver real news that is redefining the way we look at our world. HDNet News is provocative, sometimes controversial and always relevant – telling the important stories of our time in-depth, with attitude and with independence.

In addition to being the exclusive home of Sneak Previews, HDNet Movies viewers enjoy the best films from the classics of the 1950s-1970s, to favorite films from the 1980s and 1990s, to recently released theatrical films.