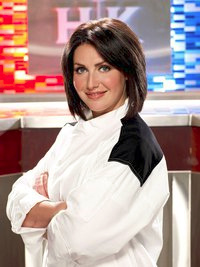 Last night on Hell’s Kitchen’s Season Seven finale, it was Jay against Holli.

Jay certainly had the confidence, telling sous chef Scott that he knew exactly what he wanted to do and he always saw himself there. Holli, on the opposite end of the spectrum, told sous chef Andi just the opposite. She had no idea what she was going to do and she hadn’t given it a lot of thought yet.

Before they started, Chef Ramsay took them on a little field trip to a new challenge. They had to cook five signature dishes for five of his executive chefs from London, in his LA restaurant, in front of hundreds of people cheering them on. Yeah, not much pressure there.

Overall, this was a pretty boring, vanilla finale. We didn’t get to see the usual menu planning. Or even the finalists’ vision of how each of their restaruarants would look like. That’s always interesting. At least with that, we get to see how different each of them are. I’m sure it was a budgetary decision as well as a timing one. After all, they did have to make time for Ramsay’s new show, Master Chef, which aired immediately after the finale ended. In fact, the whole season seemed very rushed and condensed to get ready for Master Chef.

Sadly, we weren’t spared the time-honored tradition of picking teams, however, as several of the recently released chefs came back for another shot at being on a team. Jay had first choice, and he chose Benjamin, who reminded us that he was the King of All We Could See, and was the best chef on the planet. He still couldn’t believe that he hadn’t won yet, never mind that he wasn’t in the finals. But he would do whatever he could to help Jay win.

Holli’s had the pleasure of having Autumn for her first choice. Like Benjamin, Autumn felt that she was the best chef there and was still stunned that Chef Ramsay hadn’t named her CEO of his vast enterprise yet. These two need a severe reality check.

The rest of the teams were split up as follows: Jay took Jason, Holli picked Nilka. Then Jay had to choose between Fran and Siobhan, and he chose Fran, leaving Siobhan as the only one left standing for Holli.
Things went smoothly during the preps, everyone seemed to want to help as much as possible and that mostly continued throughout the entire episode.

Just before service Chef Ramsay called both contestants into his office to talk to them, and as nervous as they both were, he had quite a nice surprise for them. A trip to Australia for each of them.

Then it was back in the kitchens for dinner service. In Jay’s kitchen, Fran started the service off on the wrong foot by burning the scallops. In Holli’s kitchen, Siobhan screwed up the garnish on her first set of appetizers. And both teams were off and running.

Back in Jay’s kitchen, Jason started pushing out undercooked lamb, something that plagued him throughout the competition, but Jay caught it before it went out of the kitchen.

In Holli’s kitchen, Nilka was bringing venison up to the pass that Holli called beef jerky. Holli then asked what may have been the best and most valid question of the season, “Why would they bring things up there that they wouldn’t eat?” She should have won based on the insightfulness of that comment alone.

In Jay’s kitchen, Benjamin took over as the sous chef and started barking out orders, keeping the food rolling smoothly. He really looked like he wanted Jay to win this thing, as hard as that was to believe.

Both services ended on a good note with both kitchens’ finishing successfully. As Chef Ramsay tallied the comment cards, it really could have been anyone’s to win. Both chefs stood in front of their doors, hand on their handles. The one who’s door opens wins.

And the winner of Hell’s Kitchen Season 7 is… Holli. And for the right reasons. According to Ramsay, “Holli won because she’s grown as a chef more than any other chef in Hell’s Kitchen,” he said. At 24, she still has a lot of time to learn and grow into a great chef. For winning Season 7, Holli will become the Head Chef at Chef Ramsay’s London Savoy Grill.

The show ended with Jay saying, in what has become a typical Jay comment, “I hope I can get her pants off tonight.” I think they had to keep that in there because it was probably the most exciting moment of a very boring show. In fact, this may have been the most anticlimactic Reality TV finale I can ever remember.

Hell’s Kitchen Episode Recap: She Ate How Many Sheep Balls???

Last Night On the Hells Kitchen Season Nine Finale: A Winner is Selected

Last Night on Hells Kitchen 2011, Epsiode 11: Are You Inspired Yet?

Carmen Electra to Host The Best Party in Texas on Super...

Registration is Open For the 2011 Budweiser Cup