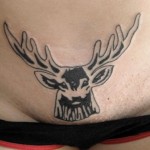 Jagermeister’s attitude just got bolder and edgier with the introduction of Jager For Life, the opportunity to turn three lucky winners’ bodies into a canvas for three of the world’s biggest tattoo stars. Whether they are looking to add to a collection, make up for an embarrassing tat, or get inked for the first time, consumers are now one click away from being inked by a living legend.

Jagermeister is bringing together Mario Barth – the rockstar and undisputed king of Las Vegas tattooing, Josh Lord – of East Side Ink and Ruthless – the hottest new tattoo talent in Los Angeles, three of the most skilled and sought after tattoo artists in the world, to offer consumers a chance to permanently show their dedication to the brand. The three master tattoo artists, known for their expert artistry and year long waiting lists, will be designing their individual interpretations of Jagermeister and its distinctive square green bottle, rich history of myths and legends, and its iconic label featuring a stag and cross. Consumers will then enter for a chance to permanently display one of these works of art on their body. The program kicks off August 27th and runs through December 31st, 2010 when three winners will be selected.

In addition to offering brand loyalists an opportunity to receive ink from a famed tattoo artist, Jager for Life is providing an online platform where consumers can immortalize their ink and showcase their favorite tattoos. Once uploaded, others can view and rate the submitted tattoos as well as share submissions with friends through top social media sites.

Jagermeister has partnered with Inked Magazine, a monthly men’s magazine that focuses on the culture, style and art of the rapidly expanding tattoo community, to bring exclusive never seen before video interviews with each of the three artists. Additionally, Jager For Life advertorials will be featured in the September and October issues of Inked.

“We receive thousands of emails from Jagermeister fans with images of their Jagermeister inspired tattoos,” says Bill Henderson, Senior Vice President of Marketing and Advertising at Sidney Frank Importing Company, Inc. “We wanted to provide these loyal consumers with something they couldn’t normally get – immediate access to three of the top tattoo artists in the world, never before seen Jagermeister ink designs and the opportunity to rock Jager For Life.”

World renowned tattoo artist Mario Barth has been tattooing for 30 years, and has won over 200 tattooing awards internationally. His clientele includes Usher, Lenny Kravitz, and Tommy Lee, to name a few. He is currently the chief tattoo artist and owner of the legendary Starlight Tattoo studios in New Jersey and at the Mandalay Bay in Las Vegas, as well as “King Ink – Mario Barth at the Mirage”, the first ever tattoo studio and nightclub, located at the Mirage Hotel and Casino.

Josh Lord began tattooing in New York 11 years ago. If Leonardo da Vinci and Charles Darwin had a love child who decided to embark on a career as a tattoo artist, his name would be Josh Lord, whose work often features incredibly detailed anatomical and naturalistic themes. He is the East Coast’s artist of the intricate and the owner of two of New York’s hottest shops; Graceland and East Side Ink–where A-listers like Rihanna and Daniel Day-Lewis have been tattooed. Lord is also the man Hollywood tapped to create the tattoos for The Last Airbender.

Tattoo’s new rising star is Ruthless, and she is not just a pretty face on LA Ink, the girl’s got serious tattoo skills. She is a native Angelino who left Los Angeles to apprentice under Tattoo Joe at Physical Graffiti in Connecticut. Then her tattooing took her to Sacred Art Tattoo in Hawaii where she developed her own Eastern-inspired style. Now she has returned home to Los Angeles and become a star working out of American Electric.

Register to win where legal and view rules and regulations at www.jagerforlife.com .

Jagermeister, which translates to “master hunter”, is the #1 selling imported liqueur in the United States and one of the top shot brands in the world. The liqueur is based on a secret recipe, combining 56 different natural ingredients, including select herbs, blossoms, roots and fruits from every corner of the globe. Jagermeister, with the distinctive square bottle, was developed in 1934 in Germany and the brand quickly gained global fame through its innovative marketing, unique taste profile and its association with good times. Jagermeister Liqueur is 35% Alc./Vol. and imported exclusively by Sidney Frank Importing Company, Inc., New Rochelle, NY www.jager.com. Jagermeister is available in the following sizes in the United States: 50ml, 100ml, 200ml, 375ml, 750ml, 1L, 1.75L.

Its Time To Get Some Fῡchen Drinking Done

Celebrate the Super Bowl with These Cocktails from Jim Beam