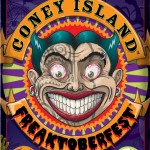 The ultimate Halloween beer, Coney Island Freaktoberfest® is artfully crafted to lure the spirit’s deepest rapture, conjured to exorcise the grim horrors of the armies of soulless Lagers everywhere. Shmaltz’s Blood Red Lager is boiled and toiled in their stainless cauldrons with 6 malts and 6 hops, and comes in at 6.66% alc.

Wednesday, October 27 @ Sip (NYC): Donny Vomit, the current MC of the Coney Island Sideshow, will perform his daring act and Freaktoberfest® will be the featured beer of the evening.

Sunday, October 31 @ Black Swan (Brooklyn, NY): Freaktoberfest®, Mermaid Pilsner®, and Coney Island Lager® will be on tap for $5 all night. Black Swan will feature a special Halloween food menu and a costume contest.

Join lager freaks and beer geeks all across the country as they enjoy Shmaltz’s new Coney Island Craft Lagers® Variety Pack. The Variety Pack includes three 12 oz. bottles each of Coney Island Lager®, Sword Swallower®, Albino Python®, and Mermaid Pilsner® (currently draft only). This is the ONLY way to get Mermaid Pilsner® in a bottle during 2010.

When asked recently in an interview if Shmaltz Brewing was “going mainstream” by adding a new line beyond the award-winning Jewish celebration ales under the HE’BREW banner, proprietor Jeremy Cowan countered: “I guess if circus sideshow freaks are more mainstream than Jews, Shmaltz is going mainstream!” Cowan states, “For over 125 years Coney Island has been and continues to be America’s Playground. Shmaltz Brewing is ecstatic to celebrate that flavor, spirit, and future through this exceptional line of unique craft lagers.”

With the unequivocally distinct brewing recipes and artwork of Coney Island Craft Lagers®, Shmaltz Brewing aims to expand its own tradition of designing unique creations that can stand with the country’s best gourmet microbrews.

About Shmaltz Brewing Company
Shmaltz Brewing Company was acknowledged by Beverage World Magazine as “Best American Craft Brewer 2010” and won the “Best In Show 2010” title, after being named “Breakout Brand” for 2009. Shmaltz was recently named one of the “Top 20 Fastest Growing Bay Area Companies” by San Francisco Business Times, and is a recipient of the “Distinguished Business Award” by the Brooklyn Chamber of Commerce.

Shmaltz offerings are available in over 25 states through over 30 wholesalers at more than 1500 retail specialty shops across the U.S. including Beverages & More, Whole Foods, Total Wine, select Krogers, and Cost Plus.