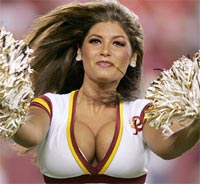 The final edition of the 2010 “Beat the House” Contest, featuring our in-house expert picks and predictions, is open and available for you to submit one last entry. By simply clicking “agree” or “disagree” for each pick you have a chance to win some prizes should the House picks turn out to be garbage. You can also win a Jagermeister 6-Bottle Shot cooler should you pick the week 17 players of the week correctly. Enter Now!

Three playoff teams are still to be decided but just as interesting is that the exact seeding for each playoff spot is up for grabs for all spots but one in each conference. The New England Patriots have locked up the #1 in the AFC while the Philadelphia Eagles can do no better and no worse than the #3 seed in the NFC. The Chicago Bears have clinched at least a bye, with the possibility still remaining that they could win the 1.

There is still plenty to watch for and most of the games this weekend have serious playoff implications either to determine a playoff team or their seeding. Only three games feature teams who are BOTH still in contention for playoff spots… Tampa Bay travels to New Orleans to play the Saints in hopes to win the second wild card berth in the NFC, while the Saints are still in contention for the NFC South championship. Chicago is heading to Green Bay to hopefully beat the Packers in an attempt to take the #1 seed while the Pack need to win to get into the playoffs.

…and we all know about the great NFC West battle where the St. Louis Rams hope to go to Seattle and fend off the Seahawks to win the division championship. The winner takes all in that game and will host an incredibly better team next week in the first round of the playoffs.

As for last week’s Beat the House results, we were delayed a day due to the postponing of the Sunday Night Football contest between the Minnesota Vikings and the Philadelphia Eagles. Here are the results of the overall voting with individual efforts still to be determined…

These past few weeks have featured some incredibly unimpressive pick sets by all parties in this contest. Week 16 was no exception with everyone being at the .500 mark or barely over it.

Again, you can’t win if you can’t play, and this is your last shot. Head on over to our “Beat the House” picks and predictions page to enter your week 17 picks as well as who you think will be the players of the week to win some great prizes!