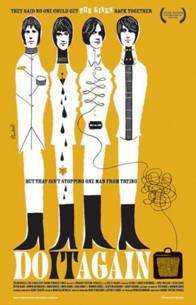 We’re excited to share the news that our artist collaboration for the 2011 Dogfish Seasonal Screenprint Series is with Baltimore-based Dave Plunkert. Dave caught our eye with his off-centered, robot inspired designs – they were right up our alley!

The 2011 Plunkert original screenprints will be available here on our website store and in our Tasting Room store at the Milton brewery as the beers are released. We’ll post release date updates on our Facebook and Twitter as we have more information.

Here are a few samples of Dave’s work (pictures pop to full images):

Dave Plunkert ‘s illustrations have appeared in advertising campaigns for Fortune 500 companies as well as major newspapers, magazines, and recording labels. His work has been recognized by American Illustration, Communication Arts, Graphis, Print, the Society of Illustrators, and The New York Art Directors Club. He has been featured in numerous books including: Cool Type, New Masters of Poster Design, The Greatest Rock Albums that Never Were, and Mixing Messages. He has taught graphic design and illustration at Shepherd College and Maryland Institute College of Art in addition to lecturing for AIGA Chapters throughout the US. His work has been collected by museums and private collectors, and has been exhibited internationally. He has received a bronze medal from the Society of Illustrators LA and a gold medal from the Society of Illustrators NY.

Here are some of the other awesome companies Dave has worked with: