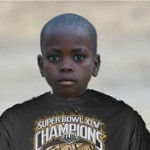 After the Green Bay Packers and Pittsburgh Steelers go head-to-head in North Texas for Super Bowl XLV, the pre-printed Championship clothing for the team that does not win will be headed to Zambia, Armenia, Nicaragua and Romania.

As it has for more than 15 years, the National Football League will donate all of the pre-printed Championship merchandise for the team that does not win the Super Bowl to aid organization World Vision. Instead of being thrown away, the apparel is distributed by World Vision to impoverished communities around the world where it has long-term development programs.

“The NFL is pleased to once again work with World Vision to ensure that usable Super Bowl apparel does not get thrown out, especially when there are so many around the globe who have never had a brand-new item of clothing in their lives,” said David Krichavsky, NFL Director of Community Affairs.

Pre-printed merchandise from the AFC and NFC Championship games have also been donated to World Vision.

“This is a great opportunity to show people that they are cared for and that their wellbeing is a priority,” said Jeff Fields, World Vision’s senior director for corporate relations. “Having personally distributed the Super Bowl gear overseas in years past, I have seen how much joy the children and families get out of receiving new clothes.”

In previous years, inaccurate Super Bowl gear has gone to countries such as El Salvador, Indonesia, and Haiti last year after the devastating earthquake.

“World Vision is incredibly thankful the NFL is working with us to help others around the world,” Fields said. “We work in the most impoverished areas of nearly 100 countries, so we already have all the systems in place to identify families and distribute these brand new clothes to them.”

Additionally, major sporting-goods retailers and manufacturers such as Reebok, Sports Authority, Dick’s and Modell’s, donate large quantities of official apparel that they have stocked in anticipation of either team winning the Super Bowl. On average, this equates to about 100 pallets of clothing annually—or $2 million worth of product. Instead of being destroyed, the items are shipped from the host city to World Vision’s international distribution center in Pittsburgh to be sorted and sent overseas.

World Vision is a Christian humanitarian organization dedicated to working with children, families and their communities worldwide to reach their full potential by tackling the causes of poverty and injustice. Visit www.worldvision.org/press .