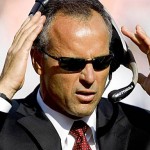 Let’s be realistic here. The Miami Dolphins are facing The Cleveland Browns, San Diego Chargers and New York Jets in their next 3 games. The only game they have a chance of winning is against the Cleveland Browns. I don’t see them getting the deed done even in Cleveland.

So if Tony Sparano thinks he can roll back into Miami 0-4 or even 1-3 he is kidding himself. Tony bring boxes to the stadium when you get back from San Diego in 2 weeks.

This is the first time in my memory that I have heard the press talking season over for an NFL team during week two. But it is realistic the season is over for Miami. If The Miami Dolphins fall to The Cleveland Browns on Sunday, moral in that lock room will collapse. Going into San Diego and New York 0-3 will be a death march. So without a doubt Tony Sparano is gone. The only question left to be answered is will the players play for Mike Nolan? I think so. With the prospect of John Gruden or Bill Cowher coming into town I think these guys will start finally showing up and trying to save their jobs.

It looks like current Dolphins Defensive Coordinator and Ex-49ers Head Coach Mike Nolan will be taking the helm of The Miami Dolphins weeks 6 -16. Nolan will have to be a superstar to keep the job. Especially with John Gruden or Bill Cowher in play Nolan would have to have a deep playoff run to become next year’s head coach. I dont thing any f us see that coming. Nolan is a good coach and awesome DC. If Miami is smart they will sign Mike Nolan to a 3 year contract now, Nolan teamed with either coach as a Defensive Coordinator would be great.

Unless Ross is a complete idiot it is time to clean house after the Cleveland game. The sooner Tony Sparano is gone the sooner you can start negotiating with a new coach. For once let get the jump on the rest of the league.

My guess is Cowher will be the coach in Miami in 2012. Jeff Ireland will be carrying Tony Sparano’s bags along Rt 817 for him. Get rid of Chad Henne too. The Miami Dolphins fans deserve better.