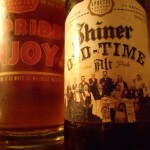 Well, it’s the last day of September, but by the time this gets posted it will probably be the second weekend of October or so.

The past couple weeks have been a little hectic as I am preparing to start another job in customer service, and have been wavering in and out of confidence for this project, and another that I started in the beginning of the month.

While asking myself whether or not this project, Intoxico, is viable and a worthwhile use of my time, the fact that despite pulling back in the amount of updating I have broke personal records. In September I have exceeded the most views in a single day (243), my personal record for unique page views in a month (2290), and exceeded a total lifetime page views at over 8,000. Now I know that this is just a drop in the pan for most blogs, but given my past history, things should continue to exceed these markers. Hopefully these small but compounding victories result in more success in my modest goals for this blog.

Tonight, after planning a bit of “session” drinking, I reached for what I thought was one beer, but pulled out instead a bottle of “Shiner Old-Time Alt”, from the Spoetzl Brewery. Because this is the last bottle I have on hand of the stuff, I decided that I needed to write up a review, despite the backlog of reviews still pending review by my editor.

Pouring the beer into the prerequisite Shiner Bock pint glass, the beer was a nice true copper color, with a slightly cloudy body. A substantial head formed then died down to about half a finger, but held strong throughout the consumption of the ale.

On top of a bready aroma, sweet caramel malt and light pine hop scents are present.

Enjoying the first mouthful of this Alt, it had a mouth feel that suggested the beverage could be chewed. The thick feeling beverage coated my mouth with the flavor of sweet, slightly burnt sugar, followed by a rush of generic hop bitterness that became more developed and pronounced in relation to the quantity consumed.

Seconded probably only by the “Kosmos Reserve”, this would have to be one of my favorite offerings from the brewery in Shiner, Tx.

I brew and drink beer, smoke pipes and cigars, eat till I’ve had more than my fill, and escape in pulp rags till my eyes turn buggy. I don’t claim any expertise in any subject other than the chase of my own earthly pleasures. I write to help others find their own pleasures so that together we will decay in spirit with these lesser pursuits.

Boston Calling Brings The Greatest Show on Earth to Allston