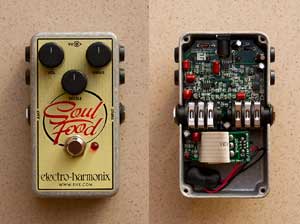 Over the last few months, there has been not a little excitement at the news that Electro-Harmonix (www.ehx.com) was about to release the Soul Food, a pedal they describe as a “transparent overdrive with great touch and response”. The more interesting part of the marketing blurb though, was the link to the almost mythical KLON CENTAUR, a pedal that has been out of production for some years now, but still much sought after. Should you find the Klon for sale anywhere, you can reasonably expect to pay anywhere between $1,500-2,000 for it. But should you want the kind of tool used by the likes of Jeff Beck, then you can expect to pay just a little extra. Could it be though that a pedal company known for reasonably priced, mass production pedals could achieve what Klon does?

Having launched the Soul Food then to an expectant market, at a very reasonable street price of around $63 including a mains power adaptor, it was no surprise that initially they were a little difficult to track down. A trip to South Austin Music a few weeks back, saw me locate one and with me cash in hand whisked it away with me.

The Soul Food come presented presented in a standard sized bare metal enclosure, with an adhesive label on its upper surface providing the necessary graphics. Aside from the usual 1/4″ in/out sockets and a 9VDC, negative centre power plug, the Soul Food has just 3 control knobs. These are marked Volume, Gain and Treble. Volume and gain act much as expected, EHX’s instructions say that the Treble control is set so that the 12 o’clock position, the tone is neutral, with a turn clockwise boosting the high end, and naturally, a counter clockwise shift cutting the high end and providing a bassier response. Looking inside the pedal, there is a very neat PCB with surface mounted components, as well as the obligatory 9V battery clip. There is also an internal Bypass control to set either True Bypass or Buffered Bypass modes.

For the purposes of testing it out, I ran a Paul Reed Smith NF3 through the ‘Class A’ 5w Ampmakers SE5a I built a few years back; it has just two tubes, a 12AX7 and an EL84. Whilst the amp has something of a British character to it, it has nothing of the gain you might expect from a Marshall or Orange product. For the test, the amp was set pretty much completely clean, only starting to move break up when really digging into the guitar. For comparison purposes, I set up with an Xotic AC Booster alongside the SF, as I had a feeling I could get similar results from it.

To start, the gain was turned right down on both, but the volume up so that they acted purely as a boost, rather than adding their own flavour to the gain. The immediate thing I noticed between the two was that the SF was brighter than the AC when set to broadly equivalent settings – it had a definite sparkle to the way notes rang out. I did eventually succeed in getting a similar sound out of the AC, but only by pushing the treble control up a good way on it. Used like this, both pedals are more than capable of livening up what can be, quite a dark sounding guitar. Even with a very clean amp, you can get quite a good crunch tone this way. Turning the gain up on both, you begin to sense that the two pedals have quite a bit on tap when required, and the tone starts to lend itself more towards single note playing. What you also start to get a sense of is that the Soul Food has more of a dynamic characteristic, where the AC seems more compressed. Using full chords set this way, you can get some very powerful sounds; more in the mold of a classic rock genre though, rather than anything more pitched towards metal playing.

Trying to make use of this characteristic, I picked my way through the opening bars of ‘Just Got Paid’. What I quickly found was that the SF got itself well and truly congested on the low E, and whilst the AC was beginning to head in that direction, it wasn’t anywhere near as untidy. What was also noticeable in the punctuating chords of the piece, was that the EHX sounded a little processed, where there was a more organic character to the AC.

Winding the gain full up then, there was a bit of a surprise to be had. The Soul Food took on a particularly aggressive bark to its sound, and it became apparent that it had rather more gain on tap than the AC. There’s a real gritty characteristic to the sound that pushes the amp along nicely, where the Xotic is really rather smooth.

Turn the gain up on the Soul Food and it does begin to show some hiss. At anything from around 1 o’clock up it can be heard, with a steady increase as you wind the wick up. It is however very sensitive to the Treble control, and it can be more or less tuned out by turning it counter-clockwise.

Overall then, my impression is one of the SF being a very usable boost with plenty of dynamic range. As I have no experience of the Klon Centaur it is supposed to be a take on, I can’t really say whether it gets there, or not. It does though represent very good value for money though at what it does. For big chords and delicate arpeggiated work on the higher strings, it works very well, particularly given that polished sparkle it has. For single note riffing on the lower strings though, perhaps less so. In practice, I could happily use either pedal for what I do. With the Soul Food coming in at around half the price of the AC Booster, if you’re on a budget then and in need of a boost, the Soul Food is well worth considering.

Special thanks to guest contributor Chris Perry for this great review.

A Guy’s Review of The Nutcracker