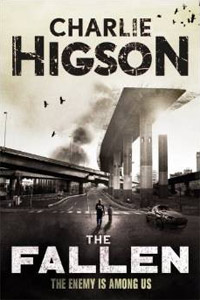 To celebrate the June 10th release date of The Fallen, the fifth book in Charlie Higson’s ‘The Enemy’ series, TMRZoo.com is giving away ONE Prize Pack containing all five books in The Enemy series plus a $25 Visa Gift Card, courtesy of Disney Hyperion, to ONE lucky winner.

As the chilling Enemy series continues to build toward its grand finale, the kids who have survived the diseased grown-ups grow more desperate for food, for a cure, for hope of any kind . . .

First the sickness rotted the adults’ minds. Then their bodies. Now they stalk the streets of London, hunting human flesh.

The Holloway crew are survivors. They’ve fought their way across the city and made it to the Natural History Museum alive–just barely. But their fight will never end while the Enemy lives, unless there’s another way. . . .

The kids at the museum are looking for a cure. All they need are medical supplies.To get them they must venture down unfamiliar streets, where it isn’t only crazed, hungry sickos who lurk in the shadows.

In this fifth terrifying entry in Charlie Higson’s Enemy series, suddenly it’s not so clear who–or what–the enemy is.

About The Enemy Series:

When the sickness came, every parent, policeman, politician – every adult fell ill. The lucky ones died. The others are crazed, confused and hungry.

Only children under fourteen remain, and they’re fighting to survive.

A gang of children begin their quest across London, where all through the city – down alleyways, in deserted houses, underground – the grown-ups lie in wait.

Entering the giveaway is simple, fill out the form below with your name and email address.

The winners will be chosen at random and notified via e-mail. Multiple entries in one calendar day by any entrant will result in disqualification. TMR Zoo will not be responsible for lost or missing mail. Good luck!!

Visit our main contest and giveaway page to see all active contests running at the Zoo.

The Beatles Books…A Long And Winding Road Of Literature