CBS announced this week that a new Star Trek series will debut in 2017. CBS thought the Star Trek fanboys would put the network’s executives on their shoulders and carry them down West 52nd Street with a ticker tape parade. It seems CBS is the latest media company to grossly misunderstand this unique fan base.

As soon as the series was announced Trekies started searching for answers regarding the most important issues surrounding the series. The biggest being would the Star Trek reboot continue along J. J. Abrams bastardized timeline or follow Universe Prime. For those of you non-Trekkies, Universe prime is the timeline and storyline true to the original series. It begins with “Enterprise” and continues throughout all of the Star Trek series and movies to “Nemesis”.

Some of the concepts that make science fiction so interesting are time travel, wormholes and parallel universes. Using these gadgets a science fiction writer can realign past storylines to justify inconsistencies in their current plot paths. J. J. Abrams did not massage these devices. He used them to shatter the timeline of Universe Prime to accommodate his uninspired, lazy writing. I would delve deeper into this, however it was documented by one of our writers a while back in this piece “J.J. Abrams and Star Trek: Douchebaggery…The Final Frontier”. CBS smartly threw out J.J. Abrams butchered timeline and thankfully the series will be returning to Universe Prime.

This does not mean all is well and good for Star Trek fans. In what can only be a moronic cash grab Star Trek will only be available online via subscription. In the press release for the show CBS announced “The new series will blast off with a special preview broadcast on the CBS Television Network. The premiere episode and all subsequent first-run episodes will then be available exclusively in the United States on CBS All Access, the Network’s digital subscription video on demand and live streaming service.”

This is doomed to fail on so many levels. Star Trek fans are the geeks of the world. The majority of this fan base will not only do all they can to avoid the subscriptions fees, they have the technical savvy to get it done. Within hours of broadcast episodes will be available for free on every offshore streaming site, torrent download site and links for the episodes will pop up all over social media. Copies of the episodes will get passed around tech companies like a drunk girl in a frat house.

Not only will CBS lose subscription fees but also whatever advertising they planned to cram into the paid service. Without subscription fees and ad money it will be shocking if the series could survive two seasons.

So what is CBS to do? It is simple put the show on broadcast television during the infomercial hours. The time slot for the show doesn’t matter anymore, most people DVR their shows and watch them at a later time anyway. Sure, there will still be some pirating or the show, but the majority of fans will DVR Star Trek and watch it at their convenience. CBS will lose what shall be non-existent subscription dollars but the ad dollars will stay intact. This money can be used to line the pockets of CBS executives and fund a 7 year journey through space.

It is time for CBS to shatter the timeline. Have Q bring you back to Monday and announce the new series will be available on broadcast television. If not the geeks of the Star Trek universe will surely have episodes on Dropbox, Google Drive and torrents within hours of broadcast. Don’t fool yourself CBS. When this was announced the Star Trek fanboys rejoiced, but none of them plan on paying for a single episode. 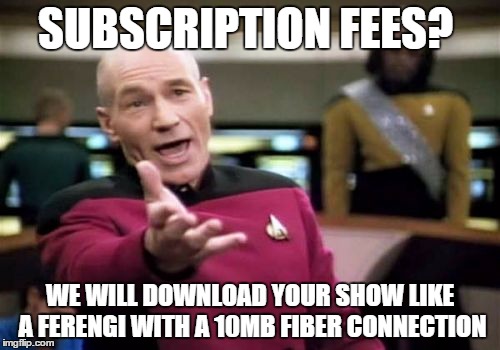 Dave & Buster’s Wants Your Help to Create the Next Big...