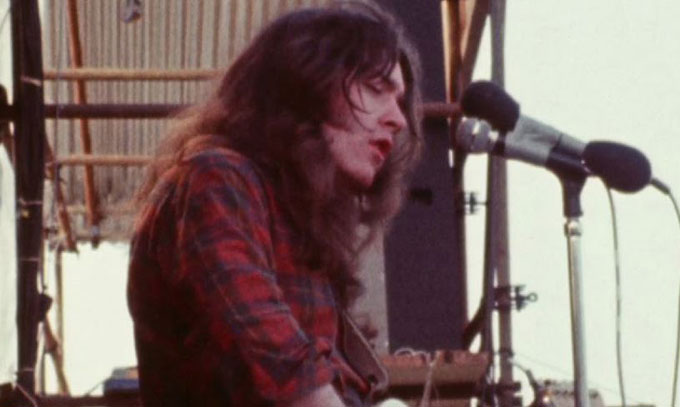 At 1:40 pm on March 9th, 2016,  Academy Award winning director Murray Lerner spoke on the Joe Vig Pop Explosion at Boston Free Radio in Union Square, Somerville, Massachusetts, a hop, skip and a jump from the Davis Square Theater where the Irish Film Festival will screen his newest film  What’s Going On – Taste Live at the Isle of Wight, 1970 at 3 PM on Saturday, March 12.

JV: And on the phone with us, Murray Lerner.  It’s an honor to have you on the show today.

ML: Thank you. It’s an honor to be here.

JV: We taped you at the Regent Theater giving a lecture in 2002 for the Jimi Hendrix film BLUE WILD ANGEL: Jimi Hendrix Live at the Isle of Wight.  It’s great to speak with you one on one today.

I love the Taste video, early Rory Gallagher, nice!  Hope you haven’t been asked this question too many times, but how many cameras did you have at the Isle of Wight?

Murray: We had nine, but we didn’t have all nine on Rory Gallagher. We had about four.  It was a small set up, nine would have been excessive.  And also, some of my crew was working the crowd, getting interviews with people who had attended the festival.  It wasn’t just the music that we filmed.

JV: The Isle of Wight was a pivotal moment in what Jimi Hendrix was doing, if we can digress for a moment to Jimi.

Murray: It was, he was changing,  he was getting less over theatrical and more musical.  Unfortunately, he didn’t have much time to go on from there.

JV: Your work with Jimi at Isle of Wight has come out in many different forms/phases, (including) Blue Wild Angel

Murray: It’s being handled by Sony, so it’s out of my control. Sony and the Experience Hendrix people.

JV: You had initially put out Message to Love, the overview of the festival.

Murray: A feature film…a new version (will be out) in about a year or so.

JV: I have the VHS version from way back, which is nice.

Murray: It’s nice but you should get the DVD!

JV: Did you remaster the original film for the DVD?

Murray: Yes, but also, you should see the 35 mm version…if you have a place to show it.

JV: There’s a resurgence of the neighborhood theaters that are playing films that are culturally important – the Davis Square Theater, for example, which has the Taste film at the Irish Film Festival this weekend.   There’s a whole base of people here in Somerville and Cambridge, so it would make sense at the Regent Theater in Arlington, where you were, or the 2500 seater in Medford, the Chevalier, so there’s this whole resurgence.

JV: I’m so happy this incredible footage is coming out.  Just watched some footage of The Doors at the Isle of Wight on YouTube.

Murray Lerner: It’s funny that you mention that. That’s the next one I’m doing.  I’m about to do a film of The Doors at the Isle of Wight.

JV: Are you working with the Doors management?

Murray Lerner: They approved it.  So in that sense I’m working with them. And with Eagle.

JV Eagle-Rock.com I love their product. They are the best.

Murray Lerner: They are….and they (are working with) my entire Isle of Wight catalog – and one will be the Doors and another will be the reissue of the feature (Message of Love film,) together with additional material.

JV: That’s something we can look forward to. Everything that you did at the (1970) Isle of Wight, Murray, is just perfect. And so important, just as important as Woodstock, I don’t know if people understand that.

Murray Lerner: I understand it! (laughs.)  I wasn’t a fan of Woodstock.  Of the film. It didn’t dig very deep.

JV: And many distractions on it and no Janis Joplin. How can they have a film and not have Janis?

Murray Lerner: Right.  I’m trying to think of why that happened.  I spoke to (Albert) Grossman about that when he was managing her. They didn’t think it was going to be a good film, I think.  Good enough.

What’s Going On – Live At The Isle Of Wight Festival tells the story of Eire’s seminal rock band Taste. Formed in Cork, Ireland in 1966 by Rory Gallagher, Taste had a brief but influential career, releasing two studio albums in 1969 and 1970 and disbanding shortly after their legendary appearance at the 1970 Isle Of Wight Festival — the centerpiece of this film.

The core of What’s Going On is the band’s performance at the festival on August 28th. Encapsulated within a documentary on the history and importance of Taste, the film features contributions from Rory’s brother and Taste road manager Donal Gallagher along with Brian May (Queen), The Edge (U2), Bob Geldof and renowned guitarist Larry Coryell.

Taste’s performance at the festival was so well received that when Jimi Hendrix was asked “How does it feel to be the best guitarist in the world,” he replied, “I don’t know, why don’t you go and ask Rory Gallagher?”

The original 1970 footage was shot by Academy Award winning director Murray Lerner. The 16mm film has been restored and the sound remixed for this 2015 version of What’s Going On – Live At The Isle Of Wight Festival 1970, which includes all the tracks on the original 1971 Polydor LP plus several additional tracks.  Bonus features include three tracks from the German TV series Beat Club: “If The Day Was Any Longer”, “It’s Happened Before, It’ll Happen Again” and “Morning Sun”.  Additionally there are three conceptual music videos for the tracks “I’ll Remember,” “What’s Going On,” and “Born On The Wrong Side Of Time”.

What’s Going On – Taste Live At The Isle Of Wight was originally released on DVD, Blu-ray, 2LP, and Digital Formats on September 18, 2015 via Eagle Rock Entertainment, and will be screened as part of the 2016 Irish Film Festival in Boston on Saturday, March 12.

By the time Murray Lerner graduated from Harvard University, he had already co-produced and co-directed a full-length feature film that was LIFE Magazine’s “Movie of the Week” and helped co-fund the first film production society in the school’s history. Lerner felt that film should be a unified art and taught himself every aspect of filmmaking, an ideal he continues to prize to this day as an active writer, director, cinematographer and editor.

Most of Lerner’s films have been recognized by a major festivals and garnered awards, including From Mao to Mozart: Isaac Stern in China, which won the Academy Award for Best Documentary Feature in 1981. His subjects have included Isaac Stern, Bob Dylan, Miles Davis, Leonard Cohen, Joan Baez, Donovan, Jimi Hendrix, The Doors, and The Who, the focus of Amazing Journey: The Story of the Who, nominated for a Grammy Award in 2009. A Class “A” Director of Photography and a member of both the Directors’ and Writers’ Guild of America, he was also a pioneer of the popular 3-D technology that is the industry standard today with the films Sea Dream and Magic Journeys. Sea Dream, seen in innovative SpaceVision, was the first 3-D film to ever be included in the Cannes Film Festival. Magic Journeys, created for the Kodak Pavilion at EPCOT and seen by over 60 million people worldwide, was the first to use computer animation, blue screen and other groundbreaking special effects. www.murraylerner.com

Inside Job Tries To Explain the Financial Crisis