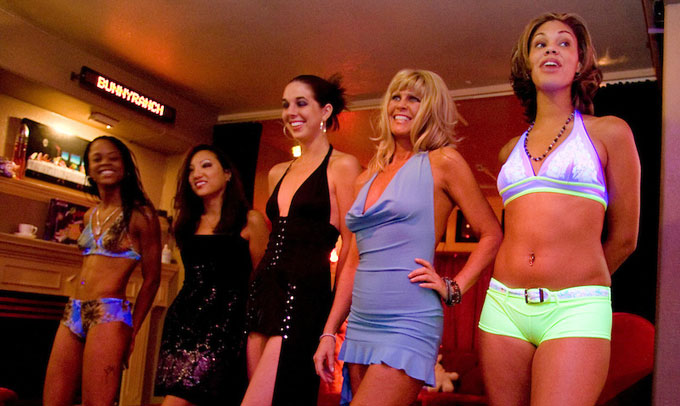 Dennis Hof, owner of the world famous Bunny Ranch legal brothel and star of HBO’s “Cathouse,” is formally considering a bid to purchase the iconic Playboy Mansion with the intention of converting it into aHollywood headquarters for his booming sex business.

The palatial estate is on the market for $200 million, and Hof sees a fantastic opportunity to use the historical location as a west coast office, entertainment facility and staging area for his seven legal brothels located just over the California border in neighboring Nevada.  The sale comes with the caveat that Playboy founder Hugh Hefner is allowed to remain living in the house until his passing, but Hof doesn’t see that as a problem.

“Hef and I are friends, and I’ve been to many of his parties over the years at the mansion,” Hof said.  “I wouldn’t mind having his experienced eye around as I interview potential new bunnies to come work for me at my legal brothels in Nevada.  He and I both know what to look for when it comes to spotting a girl with marketable sex appeal.”

Hof realizes that prostitution isn’t legal in California, but points to an ongoing effort to legalize it through the state’s courts, and sees no legal hurdles to conducting informal job interviews.  “There is so much talent in the LA area, and many of the kind of girls that we are looking for are already associated with the Playboy brand.  In fact, over the years we have had numerous Playboy centerfolds come to work at The Bunny Ranch.  This will just make it easier for them to get in touch with me.”

With possible consideration to making the Playboy Mansion his permanent residence, Hof even relishes the idea of having a roommate with similar interests and career pursuits.  “Hef and Hof could make for a great reality show,” laughs the brothel baron.  “We wouldn’t have to worry about fighting over girls.  At our house, there would always be plenty to go around.”

Dennis Hof is the author of the best-selling autobiography, “The Art Of The Pimp,” from Regan Arts.  He’s also currently a candidate for Nevada State Assembly district 36.