I’m a big fan of the Alien franchise. I’m also a very big fan of the two original Predator movies. But unlike Reese’s Peanut Butter Cups, these two great tastes taste like a dead monkey’s ass together… at least based on these first two failed attempts.

For those of you wanting reparations for the first AVP fiasco, do not look towards Aliens vs. Predator: Requiem for the payoff. Sure, it trumps the original AVP, but is that really saying much? Requiem has an infinite number of negatives and very few positives to offset the balance. The characters, every single one of them, are just meat popsicles waiting to be exterminated by either one of the warring parties. If you can relate to any one of those drones, please let me know… and I’ll ship you off to an alien planet to be target practice as well. I don’t think I’ve ever rooted as hard for major characters to bite it as I did in AVP: Requiem. The token hot chick isn’t even really that hot.

The positive side is that many of the major players in this flick eventually do become worm food. No one is safe in AVP: Requiem… children, animals, pregnant moms ready to give birth in the maternity ward… they all get their fair share of “attention” from the visitors. Some of the kills are actually pretty creative and cool though. If there is one positive in Requiem, it’s that there is plenty of blood spilled… red, luminescent yellow and acid… or a hybrid combination of any of those.

Which leads me to my next rant: Why the hybrid alien and why now? Why can’t we just develop a nice war between these two species without graying the lines already by introducing a hybrid being into the mix? It was dumb in Alien Resurrection, and it is dumb in this movie also… although both beings die in a pretty cool fashion in their respective flicks. 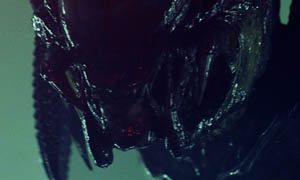 There is still plenty of potential in an AVP movie franchise. The solution to getting it on track is simple… limit the role of human beings to a vehicle for rounding out the body count and get the setting off of the planet Earth. A great deal of time was spent creating these awesome special effects and creatures. Let them shine by giving them the majority of screen time!

Outside of some cool token violence, Aliens vs. Predator: Requiem was a pretty big letdown, even when I wasn’t expecting much. You won’t miss anything by skipping this one and jumping right to the next shitty AVP product. The Zoo rates this one only two bananas out of a six-pack. Play the video game instead.

DVD Review: The Who Live in Texas ’75

The Twilight Saga: Eclipse Stays at the Top of DVD Sales...