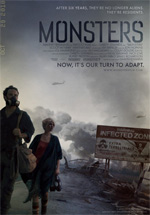 To celebrate the September 24th iTunes, VOD, XBOX, Playstation and Amazon.com release of MONSTERS, the Zoo is giving away ONE MONSTERS Prize Pack, which includes a Monsters T-Shirt ad Blu-ray versions of Let the Right, The Host and Signial, courtesy of Magnolia Pictures, to ONE lucky winner.

Monsters:
The breakout hit of this year’s SXSW, Gareth Edwards’ groundbreaking new film (also a selection at the 2010 Los Angeles Film Festival) is as much a poignant contemporary romance as it is an epic science fiction adventure. Shot with just a five person crew and a cast of two, Gareth Edwards’ team traveled through Guatemala, Belize and Mexico, finding and utilizing their locations and supporting actors as they went. The result is a film as cutting edge as it is classically composed, as emotionally satisfying as it is visually stunning, and the bold announcement of a major new talent.

Synopsis:
Six years ago NASA discovered the possibility of alien life within our solar system. A probe was launched to collect samples, but crashed upon re-entry over Central America. Soon after, new life forms began to appear and grow. In an effort to stem the destruction that resulted, half of Mexico was quarantined as an INFECTED ZONE. Today, the American and Mexican military still struggle to contain the massive creatures… Our story begins when a jaded US journalist (McNairy) begrudgingly agrees to find his bosses daughter, a shaken American tourist (Able) and escort her through the infected zone to the safety of the US border.

MONSTERS premieres Friday September 24 on VOD, iTunes, Amazon.com, Xbox Marketplace and Playstation Network, and opens in theaters October 29, 2010. For more information visit monstersfilm.com, become a Facebook Fan of the movie, and watch the trailer below:

Contest Rules:
Entering the giveaway is simple, fill out the form below with your name and email address.

The winners will be chosen at random and notified via e-mail. Multiple entries in one calendar day by any entrant will result in disqualification. The TMR Zoo will not be responsible for lost or missing mail. Good luck!!

Visit our main contest page to see all active contests running at the Zoo.