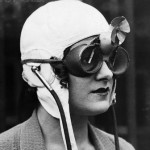 Last night on Two and a Half Men Jenny McCarthy and Charlie Sheen talk about a sexual encounter called Japanese Rain Goggles. At first blush Japanese Rain Goggles sound a lot like a Roman Helmet. Further investigation shows there may be some water play involved in the act. I am a bit surprised with all of the controversy surrounding Charlie Sheen in regards to the Capri Anderson scandal CBS let the line go through.

Now that Jenny McCarthey is back on Two in a Half Men what is next for her. Seeing the show takes place in SoCal I could see Charlie’s gardener giving Jenny McCarthy a Dirty Sanchez. Maybe Charlie Sheen himself could give Jenny McCarthy a good old fashioned Donkey Punch?

Charlie Sheen has been held on assault charges in the past. I don’t think a Donkey Punch would be a reach for the Two and a Half Men star. When it all comes down to it Jennie McCarthy looks more like a Blumpkin or Hot Carl kind of girl. Look for a Blumpkin to be mentioned on the next episode of Two and a Half Men.

Maybe Conchata Ferrell the actress that plays Berta could deliver Charlie’s Hot Carl in the series finale. That would resolve all of the sexual tension between those two over the years.

My other question is – Is just Charlie Harper into Japanese Rain Goggles or does Charlie Sheen also enjoy the act. If Charlie Sheen does like getting piddled on, what does a guy pay for that? He is claiming he paid Capri Anderson for services. Could some of those services be of a liquid nature?

If I have to guess and I am just speculating based on past reports and behaviors. My money says Capri Anderson got the Donkey Punch. Maybe Sheen opted for the Hot Carl. Either way what the hell was CBS thinking?

While you are here check out our Capri Anderson gallery.

Adriana Lima Falls Out of Her Robe at 2012 Victoria’s Secret...

Snow White & the Huntsman Actress Lily Cole Topless on a...