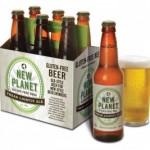 Boulder-based New Planet Beer Company introduces their third style of gluten-free craft beer to Colorado, Wyoming, Arizona, New Mexico and Utah, with more Rocky Mountain Region and Midwest States to follow. Off Grid Pale Ale is a wonderful interpretation of the classic pale ale style with a distinct deep amber color, great character and body. Three varieties of hops provide a wonderful aroma and a citrus and spicy hop flavor. This smooth gluten-free ale is made from sorghum and brown rice extract, molasses, tapioca maltodextrin, caramel color, hops, and yeast. The beer has 170 calories and is 5% ABV.

“We’ve had an overwhelming request for a hoppy gluten-free beer, so we’re thrilled to provide a pale ale with a nice hoppy aroma and flavor from a wonderful mix of centennial, sterling, and cascade hops. We are excited to get this beer out to our fans,” said Pedro Gonzalez, CEO and Founder of New Planet Beer Company.

New Planet Beer only brews gluten-free beer.
New Planet Beer Company was established in 2008 with a mission to help everyone celebrate life with a great tasting beer and to do great things for the planet. Their guaranteed gluten-free beers are crafted by brewers who bring great quality and flavor found only in small batches. This Colorado based company is family and friends owned and operated.

“We named our beer company New Planet Beer Company as a way to express our desire for a new and invigorated planet. It’s our core mission to make great tasting gluten-free beers that everyone can enjoy, while donating a portion of our proceeds to environmental efforts,” said CEO and Founder Pedro Gonzalez.

New Planet Beer Company was started by Pedro Gonzalez, who is himself gluten intolerant, along with his wife Seneca Murley. “When I first learned I had to remove gluten from my diet I was amazed how many products contained the gluten, and ended up with very restricted food choices. But after a period of time, new gluten-free products started popping up. I really missed craft beer so I started drinking gluten- free beer, but I couldn’t find a brand that truly satisfied my craving, so I began my quest to make a great tasting gluten-free craft beer that everyone could enjoy.”

No Doubt About Our Beer Being Sexy