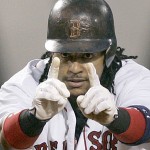 This is not a case aof Manny being Manny. This is a case of Manny being an asshole. The AP is reporting the ex-Boston Red Sox and current Tampa Bay Devil Ray outfielder has been arrested for domestic abuse. If this were the NFL Manny would be suspended tomorrow. It will be interesting to see what MLB does.

Ramirez, 39, and his wife were arguing in their bedroom when he slapped her face, causing her to hit her head on their bed’s headboard, according to a police report. She told the deputy she was afraid the situation would escalate and called police.

Ramirez denied hitting his wife, according to the report, telling a deputy she hit her head after he shrugged her. Ramirez’s wife had injuries consistent with her story, but did not want medical treatment.