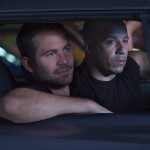 Let me start off by saying anyone who gives this movie a bad review is simply an idiot. This is Fast Five not Fast One, the audience knows what they are walking into. There is nothing surprising in this story, no twists to the plot. Fast Five is as formula as it gets, and that is good.

The film has everything you expect from a Fast and Furious franchise. Fast cars, awesome chase scenes and half naked women. What I didn’t expect was the amount of gun play in this film. I think it is turned up a notch.

This film finds our heroes Vin Diesel and Paul Walker now in Rio. This time around they are joined by Chris “Ludacris” Bridges and Tyrese Gibson in their rag-tag crew. Rounding out the cast as the anti-diesel is Dwayne “The Rock” Johnson. Can you see where this is going? Stevie Wonder could.

Surprisingly the best chase scene is not in a souped up car but on foot. There is a chase across the rooftops in the slums of Brazil – that is beyond cool.

Blu-ray is perfect for this movie. The blacks look great during the night shot race scenes. There also some beautiful panoramic aerial shots of Brazil. The sound? This is the Fast and Furious franchise correct? There is bass pumping music through the film and a choir of screeching tires. As I pointed out earlier there is more gun play in this film, expect lots of exploding cars and even exploding toilets.

If you are a fan of action films Fast Five gets a fast five stars. Cheap and easy just like we like it. Fast Five is available on Blu-ray, DVD and digital download tomorrow October 4th from Universal Studios Home Entertainment.

Looper is Available to Own on Blu-ray and DVD as of...