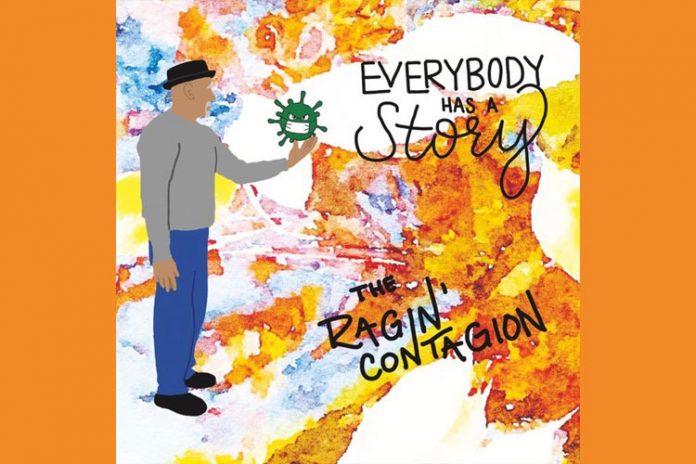 July 6, 1987 John Cale led off a new series at the Paradise Theater…it was a brilliant performance, only 34 years ago, some shows and dates stick in your head…”Wilting” is the new single from The Wolf Howls When I Scream Your Name. This, the band says, is the first of many singles from their upcoming debut album ‘Grief Songs’ on Engineer Records. The Spotify is here, If the Spotify is too lengthy try the Bandcamp with the band’s name dot bandcamp.com .

Harry Woodrow on bass, Sam Johnson on drums and singer/guitarist Matthew Awbery rock with authority. It’s Nirvana up about 7 notches in the volume and anger intensity department. With a video drenched in red Artie Fufkin posts online: Great song. Well done guys. With songwriting like this, you deserve all the success in the world. I hear this song and it makes me feel excited about new music again. The Wild Turns on Bandcamp is a hard ballad perhaps the opposite of Nicola Penfold’s book Where the World Turns Wild. Good stuff that is grunge+ with dashes of metal sprinkled throughout.

12 songs by The Ragin’ Contagion – a band featuring David Godbey of Fox Pass fame – are an interesting brew. This is one of the most unique collections I’ve heard in quite some time ranging from d.i.y. to Frank Zappa goes sophisticated pop. I’ve yet to get a handle on it after a number of spins in the car. Which is why I’m thinking of interviewing both The Wolf Howls When I Scream Your Name and the Ragin’ Contagion to get their perspective in our famous Going Track by Track series.

I’m in the middle of Stephen Davis’ new book on Duran Duran …from Led Zeppelin to Carly Simon, Stevie Nicks and Jim Morrison, Davis writes a scholarly book that is full of fascinating angles on this group. I’ve never been able to figure out who the members of the band are, couldn’t name one of them (before reading this,) and wouldn’t know them if I walked into one or all of them, but I have always liked “A View From A Kill,” the James Bond hit the group had. The only song of theirs I know…and like…Trust me, this book is far more interesting than their recordings (other than 007)… The title of the book I guess is the intro to a song entitled “Is There Something I Should Know?,” at least that’s what YouTube says. With 6,699,593 views as of tonight on YouTube all I know when I hear disco rock is that I want to hear some John Cale or Nico…but – as stated – it makes for good copy – not listening – or maybe Stephen Davis’ genius can even make Duran Duran interesting…

That Jimi Hendrix’s current publicist is also handling this is a tribute to Mr. Berns indeed. When record labels had as much charm as the musicians they preserved and promoted, it’s great to have the history properly recorded. More info on this amazing disc soon.
___________________________________________
I’ve got a surprise interview for author Stephen McCauley in my computer, so much to do, so much to document….lots of new music and CDs pouring in…God Bless the Go Go’s, Ricky Byrd and two from Bobby Womack, 40th Anniversary Edition of The Poet and the Poet II, from the original tapes, new liners, all very delicious. Glad my Mazda2 has a cassette player so I can hear all these gems.

Zendaya Coleman Has a Wardrobe Malfunction on the Met Gala Red...

Axl Rose Claims His Throne as the Biggest Douche in the...