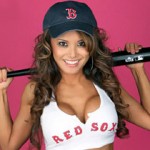 This 342 page book from !T/Harper Collins came out in 2009 and contains 22 chapters and an epilogue along with notes and an index. It’s a delight for sports fans from this region who want to revel in the victories.

What’s really fun are the eight pages of color photos at page 150 – Papelborn and Ortiz with the Worlds Series Trophy, a young fan meeting Jim Rice during an appearance at a local supermarket, photos of Tom Brady and Randy Moss…the Moss caption stating that the player brought a “graceful artistry to the mix”, certainly when Tom and Randy were clicking, but strange how quickly things can turn in the sports world.

The chapter on Spygate is interesting and gives proof that the Patriots didn’t need any video cameras to win games while Chapter 16, Rematch in Indianapolis brings to light how all sports in Boston generate a rich tapestry…the Bruins “banished to the road for the first five games of the season because the Ringling Brothers Barnum & Bailey Circus was ensconced at the Garden”…while the Red Sox were arriving for Game 3 of the World Series. What Mr. Buckley’s book does is put the snapshot of the era in book form, something that could easily have been overlooked by publishers as the print media, internet and radio cover the territory so fully. One initially wonders if a book about it all is over exposure…

My perspective is that Wicked Good Time captures the moment for the generations to come. It’s a book more for the future rather than the present time, and a nice way to firmly establish for historians the magic of living in New England during this impressive run of victories from the three major teams – the Red Sox, Patriots, Celtics. A nice investment to put away for study down the road.

Joe Viglione is the Chief Film Critic at TMRZoo.com. He was a film critic for Al Aronowitz’s The Blacklisted Journal, has written thousands of reviews and biographies for AllMovie.com, Allmusic.com and produces and hosts Visual Radio. Visual Radio is a fifteen year old variety show on cable TV which has interviewed John Lennon’s Uncle Charlie, Margaret Cho, Ray Manzarek, John Densmore, Felix Cavaliere, Marty Balin, Bill Press and hundreds of other personalities.

Rick’s Cabaret NY Girls Show Their Back to School Outfits