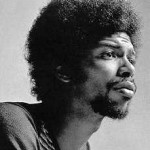 The worlds of  hip hop, acid jazz and rap all mourn today. Gil Scott-Heron is dead at the age of 62. Gil Scott Heron was the voice of the African American music community during its most turbulent times. Gil Scott-Heron laid the foundation for what would later become hip-hop, rap and acid-jazz.  Widely known for his socially and politically attacking 1974 release The Revolution Will Not Be Televised Gil Scott Heron continued to record up to his death.

There will be no highlights on the eleven o’clock news and no pictures of hairy armed women liberationists and Jackie Onassis blowing her nose. The theme song will not be written by Jim Webb, Francis Scott Key, nor sung by Glen Campbell, Tom Jones, Johnny Cash, Englebert Humperdink, or the Rare Earth. The revolution will not be televised.

Often criticized, sometimes deemed homophobic and even racist Gil Scott-Heron did not shy away from releasing songs like The Subject Was Faggots and Whitey on the Moon.

Whitey on the Moon was Gil Scott-Heron questioning why so much money was being spent on outrerspace when we had so much poverty in inner-cities.

Taxes takin’ my whole damn check, Junkies makin’ me a nervous wreck, The price of food is goin’ up, An’ as if all that shit wuzn’t enough: A rat done bit my sister Nell. With Whitey on the moon

Though Gil Scott-Heron was definitely controversial he was a pioneer on the worlds of poetry, music and literature. Sleep well Gil Scott-Heron and thank you for inspiring a generation.

Thank You James Moody: Jazz Great Dies At The Age of 85

Genya Ravan: “Do You Know What I Mean”