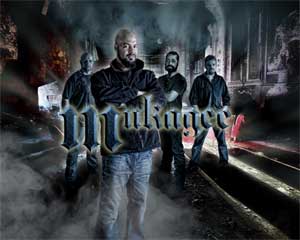 MUKAGEE pronounced: “Muck-ah-jee”, is a powerful groove based heavy rock band with an incredible sound you need to experience! Poised on the cusp of break out stardom, this San Jose, CA. based metal band cannot be ignored. Led by the amazing lead vocals of Mzao ‘Mo’ Waters backed by the grooving bass of Dave Wilson, soulful drums of Art Williams and the rocking guitar duo of Bob Lemos and Alvin Gatewood,  these 5 innovative musicians knew they had something special. They have managed to create a unique sound that sets them apart from their contemporaries in the Hard Rock/Metal genre. The MUKAGEE sound has depth. Combining a core Metal sound with heavy influences of Rock, Alternative and the Blues, these artists have taken their music to a whole new plateau. MUKAGEE delivers a full package of heavy riffs, fist-pumping rhythms, crushing beats and powerhouse vocals. Their live performances showcase music delivered with an intensity and energy few bands can match which has garnered them many opportunities to perform alongside some of the most notable national acts in music today.

MUKAGEE released their debut CD “What You See” along with a multitude of supporting videos in 2012.

What You See (Track Listing):

The band has been performing live consistently in support of the release and will be unleashing a new EP tentatively titled “Twisted Control” in 2015! Prepare yourself for MUKAGEE.

My Top 8 Video Game Franchises That Need a New Entry