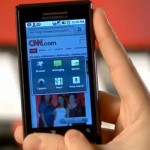 I am a gadget guy. I have always been one. The one gadget I have not chased is the Smartphone. Until now I have never found a combination of hardware and service that I liked.

Before moving to Southern New Hampshire I had Sprint Cellular service. Sprint service was great in Boston proper; I never traveled north of Cambridge or south of Chinatown.

Once I moved to Southern New Hampshire the only place I could get service was at the Mall on the NH/MA line which was unfortunately where the Sprint store was.

No matter how hard I tried Sprint would not let me out of my contract. Even though I have moved across state lines, Sprint’s argument was that my new house was on their coverage map.

Even after I begged them to try calling the phone to see if I had service they told me it would be $175 to get out of my contract. Being a sales guy my phone is my lifeline I have to have mobile service; I had to take the $175 hit.

I switched to Verizon Wireless service after my nightmare with Sprint. 7 years later I haven’t even had a dropped call. I will never change service again.

My second issue with smart phones is the hardware that has been available. I am a Motorola guy. I loved my Motorola 550 back in the day which was replaced by a Motorola Elite and eventually a Motorola Startec. The few times I have strayed away from Motorola phones I have regretted it.

When asked by friends when I would make the jump to a Smartphone my reply has always been “when Motorola makes one for Verizon Wireless service”. That day is here.

The Droid showed up at my door last Friday. It was love at first site. I wanted to review it the second I touched it. Common sense told me to wait and really get a feel for the phone.

We here at TMR gave the new Droid a workout testing it in two markets. Our first test was coverage. In both Philadelphia and in MA/NH we got service in areas where the iPhone fell short. In Philadelphia we were able to get 3G service at the Lincoln Financial Field. We could never get AT&T and the iPhone to work there.

In New Hampshire I found myself in a rural area outside of Manchester the 3G service was lightning fast. This was while my friend struggled just to push out a call with his iPhone.

The Droid was pushed to the limit on Sunday when it became a remote TMR workstation.  We took a crack at live blogging from a difficult location… a sporting event, and had great success. The ability to easy update this site, while getting great 3G reception in a densely populated area, led to our new site feature Live from the Linc: A Live blog from the tailgating and NFL game scene. Read our first edition to see the endless possibilities.

For the past few days we have been able to take stunning 5mp pictures and upload tem instantly to our website. We have access to all of our back office applications and productivity tools. One big advantage is I have access to my corporate email via the MS Exchange friendly phone and my personal email through Gmail.

I would suggest also signing up for Google voice to get additional functionality. Google voice has call routing and even a direct to voice mail feature. The features can be applied globally or to an individual contact.

The sliding QWERTY is easy to navigate. I can surf the web and even enter posts into the TMRzoo vBulletin forums, a feat that our Sports Editor Neil’s Blackberry won’t pull off.

The Droid also had Google maps and navigation for free. Not only does the application help you get from point A to point B it is Google search smart. Unlike my Garmin I can enter Thai Food and I get a graphic display of all of the closest Thai Restaurants. I entered the name Bob Miller and the Droid directed me to Dr Robert Miller in Boston.

This is a smart phone. Is it an iPhone killer? I think so. The Droid has better coverage for the traveling business user. It is MS Exchange friendly for the corporate IT manager. The Droid also allows me you clear my laptop bag of my iPod, digital camera, GPS, video camera, cell phone and yes even my laptop. This is the Droid you are looking for.

NFL Mobile From Verizon Wireless Gets Major Update Just In Time For Andriod 2.2

Five Things To Do This Month With Your Verizon Wireless Droid

Review: ‘Jersey Boys’ – Despite Flaws, it Gets Enough Right