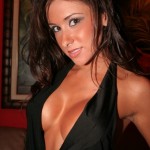 Today on Sunday NFL Countdown, ESPN’s Chris Mortensen reported the Jen Sterger sexting scandal is on a “fast track” and gave a four to six weeks timeline for this to be resolved. As we reported earlier in the week unless there is a smoking gun the conclusion of investigation will most likely fall outside of Brett Favres NFL career.

With the absence of Brett’s face in the pictures it will be very hard to prove it is the Vikings INT machine. Even if phone records point back to Brett’s phone the NFL will have to prove that it is Brett’s penis in the pictures. I can smell a “someone got a hold of my phone defense coming”.

As we have seen in other infidelity cases the rule of thumb is deny, deny, deny. Ashton Kutcher was recently faced with cell phone evidence and he continues to deny his infidelity allegations.

What could be the death blow in this situation for Brett is he in no longer a New York Jet. Woody and The New York Jets organization have absolutely no interest in protecting Brett Farve.

Sports Illustrated’s Peter King reported The Jets have said they are “working closely with the league in their review of this matter.” Jenn Sterger, the former Jets game-day host who is now a TV host on Versus, is reportedly also cooperating.

Add to this mix two massage therapists that also say they were sexually harassed while Brett was a Jet and this doesn’t look good. The only thing that could make this worse is if the countless women Brett has been rumored to have bedded in Wisconsin start to come forward.

We end this update with some Playboy and Maxim pictures of Jenn Sterger. Click on the link and tell us if you think she is worth a Hall of Fame legacy.