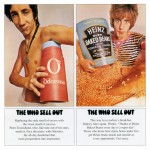 Two-CD The Who Sell Out – Deluxe Edition Expands the 1967 Classic With Both the Original Stereo and Mono Albums, and Dozens of Alternate Versions, Including Five Previously Unreleased

One of rock’s most innovative concept albums from one of the most influential bands in music history, an homage to pop-art that includes The Who’s highest charting U.S. hit, “I Can See For Miles,” 1967’s The Who Sell Out has been remastered from the original stereo and mono masters for the first time and expanded into a two-CD package with 27 additional tracks, including five previously unreleased recordings and alternate versions. The Who Sell Out – Deluxe Edition (Geffen/UMe), released June 2, 2009, notably marks the first official reissue of the mono mix in either the U.S. or U.K. since 1967.

In addition, The Who Sell Out – Deluxe Edition features a limited edition replica of the Osiris Visions poster packaged only with the original first pressing of the album, a 28-page booklet containing rare photos and 1960s period advertisements, a CD sleeve with outtakes from the original album cover photo session, an introductory essay by noted rock writer Dave Marsh and in-depth liner notes by Who biographer Andy Neill.

The concept of The Who Sell Out is that the album is a broadcast from pirate radio station Radio London, complete with faux jingles, commercials and public service announcements. The Andy Warhol-like flaunting of commercialization includes the iconic sleeve design of images of each band member hawking a product: Pete Townshend for Odorono deodorant, Roger Daltrey for Heinz baked beans, Keith Moon for Medac spot cream, and John Entwistle for a Charles Atlas exercise program. Just like the third album from the Rock and Roll Hall of Fame band, there are also inklings of the group’s next effort, the landmark Tommy, such as with the track “Rael” from an earlier Townshend rock opera.

Added to the original stereo album (Disc One) are previously unreleased recordings of Eddie Cochran’s “Summertime Blues,” the remake version of “Rael, Part 1 & 2” and the full “Premier Drums” commercial. Other highlights include The Who’s take on Edvard Grieg’s classical piece “In The Hall Of The Mountain King,” an alternate of “Mary Anne With The Shaky Hand” and another “Rael” bonus, “Naive.” Added to the original mono album (Disc Two) are the previously unreleased early stereo demo of “Relax” and alternate stereo version of “Glittering Girl,” along with early mono mixes of “Rael,” “Tattoo,” “I Can See For Miles” and more.

In December 2008, The Who became the only rock band to date to receive a Kennedy Center Honor, America’s highest cultural award.

The Who Set to Rock Super Bowl XLIV Halftime Show