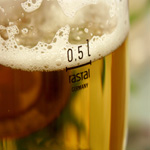 London’s only remaining traditional family brewer, Fuller, Smith and Turner P.L.C, is delighted to reveal that it will be showcasing an extended range of beers at Taste of London next week. The sell-out event is back this summer in Regent’s Park from 18th – 21st June and Fuller’s has been a part of the food and drink extravaganza since its conception in 2004.

The popular Fuller’s bar, which will be situated opposite the British Airways music stage in stand G1, previously sampled five different ales at the event: London Pride, ESB, Organic Honey Dew, London Porter and Discovery, giving visitors the chance to try some of the finest examples of the brewer’s art.

This year will see the addition of the gloriously rich Golden Pride which has been described as ‘the Cognac of beers’ [1], and 1845, the only bottle-conditioned beer on the stand. Bottle-conditioning means there is some yeast left in the bottle, allowing it to continue to ferment, adding to the depth and complexity of flavours and aromas.

Promotional activity on the stand will focus on Organic Honey Dew, the UK’s best selling organic beer [2]. A new 4-pack of Honey Dew 330ml bottles is being launched in July in selected Sainsbury’s Local and Central stores and this launch will be supported at Taste of London by the distribution of money-off vouchers which will drive people to the stores.

John Roberts, managing director of The Fuller’s Beer Company, said: “Fuller’s truly is London’s brewer so it is only right that we are present at Taste of London. We have a terrific range of beers, all of which are flying off the shelves, and our stand at this year’s event gives the public the chance to sample a few that they may not have tried before.

“By focusing on Organic Honey Dew, a light golden beer which is always served chilled, we are hoping to appeal to many larger drinkers who may not be aware of the breadth of our range.”