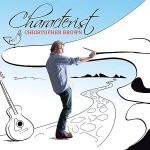 The twelve songs on Characterist present Christopher Brown in a simple setting, his Harry Chapin-esque story songs sometimes happy, sometimes plaintive, yet always textured in pretty sounds. “Do the do over, starting now” is a simple and snappy ode to reinvention, reworking one’s perspectives in sometimes startling ways. “Not so polite” is the direction here, to ruffle feathers, talk louder and get into fights. Provocative talk for a cute ditty, indeed.

Producers Peter Calo and John Walsh played live onstage with Brown back in July of 2008, a video of “Dominoes” (not on this CD) on the CBOnline.net website, both musicians performing with him on and off in 2011. Calo’s work with April Martin, Pamela Ruby Russell and many others is a guiding hand that brings the best out of the songwriter/singers while making sure to not get in the way. That’s a tall order when the tendency is to sometimes bring in some Phil Spector arrogance of a musical director putting his own stamp on the artist’s work. That two producers can work in harmony to get a strong performance on “Got To Give The Devil His Due” is an indication of how well these pros work together – efficiently with the mission in mind.

“Guinevere of Camelot’ has an intentional old-world feel and a telling vocal, neo-Celtic and begging for a duet with Loreena Mckennitt. “Cyrano and Juliet” continues the nod to music from years gone by, and a deep and authoritative voice to punctuate the message. Brown says that he’s not even sure if “Characterist” is a word, that he first used it to describe Albert “Al” Hirschfield which Wikipedia calls a “caricaturist” who “was known for his simple black and white portraits of celebrities.” From the “UFO Song” to “One Ice Cube” Christopher Brown is in control…be it as a musical caricaturist (one who specializes in drawing ) or as his new term, Characterist. Perhaps it’s time for him to write a song about that… a title track from this disc to come to life on his next.

Joe Viglione is the Chief Film Critic at TMRZoo.com. He was a film critic for Al Aronowitz’s The Blacklisted Journal, has written thousands of reviews and biographies for AllMovie.com, Allmusic.com and produces and hosts Visual Radio. Visual Radio is a fifteen year old variety show on cable TV which has interviewed John Lennon’s Uncle Charlie, Margaret Cho, Ray Manzarek, John Densmore, Felix Cavaliere, Marty Balin, Bill Press and hundreds of other personalities.

Guitar Gear Review: Seymour Duncan Pearly Gates – Get Some of...