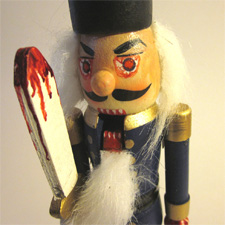 Seriously, here is my simplistic overview of The Nutcracker to help guys who may have to sit through it due to a daughter or son or uncle who is performing in it.

Side note: The show may be slightly different from one ballet company to another or… the horror… if you have to sit through a grade school performance.

First, everyone comes to this Christmas party held at some rich dude’s big fancy house. The father collects lots of presents but seems slightly annoyed that there is lots of presents. It must have been a bad economy in 1800′s or whenever this ballet was written, because when the maid hands him the fourth or fifth package, he is over it. The older son pops out from the pile of presents and the Dad does that finger waving thing that Dads did long ago showing disapproval. The finger waving thing later in history turned into spankings until some parents took that too far by disfiguring their children for life. So today we send our children to therapy sessions when they are bad.

So, next, the parents at the party pretend to talk to each other while the boys chase the girls with wooden swords.

A magician , who invites himself, interrupts the party with some cheap magic tricks. This being so long ago, everyone is delighted with the dollar store cane turning into plastic flowers trick, and jump up and down and exaggerate laugh-clap.

The Magician then passes out some toys, but not all the kids get toys, so that seemed pretty crappy.

Then the Magician does a puppet show where a giant mouse fights a soldier. The mouse stabs the soldier pretty bad, but the soldier survives to stab the mouse in the same way. The mouse dies because mice are wimps when they get stabbed.

For some reason, the Magician gives the little girl a Nutcracker doll like you see at Walmart or Target for about $10 to $15. She is super thrilled with the gift because back then $10 was a lot of money. All the other children dance/chase her around trying to crack nuts with the doll trying to look at the doll, until her big brother gets the doll and breaks it. The little girl is sad because now she has to crack her walnuts with a hammer, but the Magician fixes it.

The kids run off the stage and the adults do one of those old time renaissance type of dances where you lightly hold the fingers of your woman and stand as far away as possible while box stepping and nodding to other women. Then they get their drink on.

Everyone leaves and the girl falls asleep. A lot of mice suddenly appear. It’s apparent that these people need a good exterminator. The Magician however has creepily been hanging around long after his invite, and good thing too, because he chases the mice away by giving them a bad vibe about his intentions and a plug to his next gig.

The girl and the Magician dance about their victory, but the girl must have poor iron levels because she falls asleep again.

The Magician did a bad job of chasing away the mice because they appear again, and they are bigger this time. Some soldiers break into the house and fight the mice off. Even though there is cannon fire and sword fighting, the parents never seem to wake up and run downstairs to see what all the commotion was about. I wouldn’t let my children sleep downstairs if I had such the rat problem personally. The giant rat king and the Nutcracker fight until the Nutcracker wins. My guess is he won by squeezing his head in his nut cracking mouth, all though he would need some help pulling the lever in his back. Then the Nutcracker disappears and some dude in male anatomy-enhancing tights appears in his place. The girl is glad to see him probably because she is on the verge of puberty and has questions about her body. This guy might be able to help since he isn’t afraid to dance around with the twigs and berries practically exploding from his pants. Instead some people dressed as snow flakes dance around for a little bit and the curtain falls.

Seems like the end of the story, but no, only intermission.

Act 2 starts with some fairies dancing around for a little while. Then suddenly some Arabian dancers start dancing with a giant purple parachute. I didn’t even know they had parachutes back then! That dance was pretty cool. Then some clearly Russian-looking dudes, dressed in Chinese costumes, danced a Chinese-looking dance. One of the guys had to point his two index fingers in the air the whole dance. I’m not sure if he was warning us of something overhead that may look like it was falling, but the guy had to point up no matter what the rest of his body was doing. Then in a confusing twist, some Chinese guys dressed as Russian dancers came out and did that impressive squat-kick-swing the leg-jump and clap thing that is stereotypical of what you expected from Russian dancers. I think this part was directed by M. Night Shyamalan.

Then I fell asleep.

I was awaken by people clapping, cheering, and standing on their feet.

So I did the same.