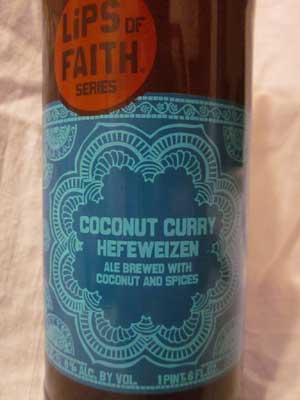 Is it just me or when you see a beer with “Coconut Curry” in the title, you just have to take it home? I have to know what it’s like! I have to try it. I also enjoy that I’m supporting creative brewers, but my motives are far from altruistic. I want what others call “weird beers.” If it weren’t for weird beers how would we know that we like beers with coffee or syrup or chili peppers or smoke or weasel poop? Without creative brewing we’d all be drinking fermented honey or fruit juice or something. So let’s keep this progression going because if beer as we know it is this good, who knows what a few experiments might turn up over the next several hundred years! It’s our solemn duty (*wink*) as craft beer drinkers. All right, , but seriously… rare ingredients are good things. This beer seems to have them and the Lips of Faith series by New Belgium has turned out some pretty damn good brews. How can I lose, right? Let’s pour!

Aroma 10/12 – This is a not a bruiser in the aroma department, but I will give it kudos for performing the seemingly impossible task of incorporating all of the ingredients of its namesake into the aroma. At first this comes across the nose as a sweet-smelling hefe: gum-like Belgian yeasts and a a spicy clove note. Then you start to realize that part of the sweetness is in part thanks to the coconut. The coconut does not come across aggressively or über-sweet like some of the candies based on the same, but instead like the creamy, almost neutral sweetness of coconut flesh. In the back is the curry that steadily grows stronger as the beer warms. At first the spice is simply detectable as an overall spiciness, maybe an extra boistrous strain of Belgian yeast providing more-than-usual pepper notes or an especially zesty clove, however the curry slowly becomes more distinct to eventually take a seat as one of the predominant aromas. We are left with a Belgian yeast sweetness, made to seem sweeter by a well-hidden coconut, and loads of spice. Neither one overpowers, but both are strong.

Appearance 2/3 – Despite not mishandling this beer, I was disappointed to see white floaties traveling around my glass like annoying insects that I could not shoo away. Having not yet taken a drink, I’m unsure if they are pieces of coconut, sediment from the hefe, or some combination of both. The beer is cloudy as the style should be and pours a dusty golden hue. Its head is ivory in color and constructed of many tiny, distinct bubbles that are steadily replaced by line of their brethren rising from the bottom.

Flavor 19/20 – There is no easing your way into this beer. From the moment it hits your lips, it is upon you and greeting you as zealously as a long lost aunt during an surprise Christmas visit Things begin as a very spiced version of a hefe, but quickly the curry takes over the flavor. This is a bit scary since a curry flavored beer has been requested by approximately 1 person ever who was then promptly flogged – not a exactly a popular option. With a little bit of patience and close attention to what is being tasted, the spiciness (almost bitter for a moment) combines with a wash of coconut sweetness and the flavor turns wholly into that of a delicious Indian meal. The sweetness of the hefe was almost completely drowned out by the spices but is reborn in the coconut and the transition is surprisingly easy – huge kudos to the folks at new Belgium for spotting these complementary flavors in seemingly opposite corners. Fascinating! The finish, much like the food, leaves plenty of spice on the tongue and is perhaps partially aided by a lively carbonation. This lingering spice not only muddies the remaining hefe sweetness into an earthier, darker version of itself, but also leaves the tongue tingling in a few distinct places. The aftertaste is surprisingly non-existant or perhaps just seems that way after such unmistakable flavors.

Mouthfeel 4/5 – The carbonation started out as extremely active, but halfway through the bottle mellowed to that of a frisky american lager. It has a medium-heavy body which actually gains a nice smoothness as the carbonation shrinks. There’s no real warmth to speak of no matter what the curry tells you.

Overall Impression 9/10 – This is an impressive brew. Not only did they use such exotic and unconventional ingredients as coconut and curry, but they also missed all the pitfalls that can happen when utilizing such potent ingredients. The hefe behind these large ingredients is quite good and not some sub-par version hiding behind flavors. New Belgium found a sweet and lightly spiced beer and paired it with a sweet and spicy food. This combination may be out of left field, but works together like the field of dreams.

Total 44/50 – To say I’m surprised by how well this beer works would be an understatement. I buy a lot of unusual sounding beers. The constant experimentation and pushing of boundaries is something I find exciting in both food and drink and the ingredient list on this beer certainly satisfies that. Not only do I find these things exciting, but new ingredients also pique my curiosity. The beer has a good hefe base to it, which is only detectable in brief splashes. After that, it’s “The Coconut & Curry Show,” and the beer excellently replicates the taste of those succulent Indian dishes. If you like that, you’re bound to like this beer. If not, it still may have something to offer. The spice and sweet, fruit-like qualities of a hefe pair surprisingly well with the same qualities of the Indian food. Granted, the curry/coconut takes the spice and fruit levels and cranks them up to a level beyond what we beer drinkers would call “imperial.” The coconut/curry is an exaggerated version of the style’s calling card flavors, but the similarities are undeniable; I can see why they made it. I like this beer. Tasty, unique, well done, pronounced, an excellent pairing of style and new ingredients, and it’s exactly what it claims to be on the label. My only question is, if I order this in a bar, do I receive some naan instead of pretzels?