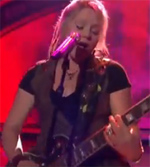 Last night on American Idol, we were immediately reminded that on last week’s results show Michael Lynche was saved in the last possible moment using the coveted “Judges’ Save”. That, obviously, was where the four judges decided to retain someone, even though the American public foolishly voted them off.

Of course, the consequence to that action is that this week, two contestants get the heave-ho instead of just one. You knew there had to be payback somewhere.

This week’s theme is the great Elvis songbook, and the Idol hopefuls selected a lot of The King’s bluesier selections. For the first time, Idol used an alumnus, Adam Lambert in this case, as the guest mentor.
Here’s how I saw them. In all fairness, 1 & 2 could have almost gone either way. It was a pretty close call.

1 – Crystal Bowersox – Crystal kicked off the show with the ultra bluesy, Saved, using an electric guitar instead of her usual acoustic and it had gave it the extra kick she was looking for to start the song. She most certainly had the blues goin’ on. Her change in tempo from fast to slow at the halfway point was spectacular. What a way to start the show. I was hoping for In the Ghetto, but I wasn’t disappointed in her choice.

2 – Lee Dewyze – Adam called out Lee on the fact that he has no emotion when he’s singing, something that the judges have been hitting him on for weeks. He picked, A Little Less Conversation, a great song for his vocal tone and range. Every week his confidence improves and every week his singing gets better right along with it. His voice was strong and he seems to be opening up more. He’s even sounding less like Adam Duritz every week and coming into his own voice.

3 – Michael Lynche – Michael sang one of my personal favorite Elvis songs, In the Ghetto (I’m glad someone did, even if it wasn’t Crystal) and as emotionally attached as he becomes to songs, it was a good fit. He changed the arrangement enough so that it didn’t even sound like the original anymore, but it still connected and it still worked. The falsetto move at the end was a great touch and gave the song the emotional charge it needed to tie it up. Ellen said simply, “I’m glad we saved you.” Me too.

4 – Tim Urban (yeah, I’m shocked too) – Tim really slowed things down with the great ballad, Can’t Help Falling in Love with You. He actually had some nifty guitar work goin’ on and a pretty nice lilt to his voice. Who knew he had it in him?? He really should stick with ballads. They seem to suit him. The falsettos were great. He changed up the arrangement and really made the song his own, in a pretty nice way. He has even managed to move out of the “Tim Zone” and into a “normal person” range of work. Despite Robyn’s assertion, you don’t necessarily need “Swagger” to do Elvis (but it helps), because Tim certainly has none.

5 – Katie Stevens – Katie sang the bluesy Baby, What You Want Me To Do? And she nailed it. She was confident and had swagger. People in my house keep saying, “Back that sass train up.” And I’m not even sure I know exactly what that means. I’m thinking she was pretty good. Actually, she was pitchy in some areas, but the song was so much fun to watch her sing, we won’t hold that against her.

6 – Siobhan Magnus – Siobhan sang one of Elvis’s most commercial songs, Suspicious Minds and her voice was suited perfectly for it. It possessed the richness and fullness that the song required. Her vocal runs are among the best and cleanest in the competition. Her now signature power run at the end of the song wasn’t even a scream this week as it has seemed to be in weeks’ past.

7 – Casey James – Casey sang the little known Lawdy Miss Clawdy and it wasn’t one of his best performances. He sounded screechy in some areas and very solid in others. The song seemed rushed. There were many other, better songs he could have chosen that would have showcased his voice much better. He didn’t seem nearly as sure of himself as he usually does and it affected his performance.

8 – Aaron Kelly – Aaron sang the American Classic, Blue Suede Shoes. His slicked back hair and pulled up collar were nice affectations. But, it was somewhat reminiscent of a high school musical performance. However, the vocals weren’t half bad. He moved away from his comfort zone country roots and went closer to blues than he ever has in this competition.

9 – Andrew Garcia – Andrew tamed down Hound Dog so much that during the practice Adam Lambert told him that he was bored. And, during the actual performance, it wasn’t much better. He took another American Classic (Yeah, I dare you to call it anything else!) and decimated it. He stripped it down to the point of flatness and lifelessness. No matter how many times he tries, he cannot rearrange these songs effectively the way others have before him. He just isn’t talented enough. Enough said. If he doesn’t go home this week, there is no justice in the American Idol world.

SIDE NOTE: Congratulations to American Idol Bandleader Ricky Minor for being hired today as the replacement Musical Director for The Tonight Show Band, replacing Kevin Eubanks in June.

FOX To World Premiere Season 12 of “American Idol” for Fans

Last Night on American Idol: The Two Finalists Squared Off

Bruno Mars Is From Another World!!