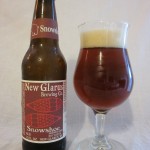 Well, the “drink it now” part of my brain won out today, so I will be reviewing New Glarus’ Snowshoe Ale. In the past, I’ve been pretty nit-picky on New Glarus beers because they’ve clearly established themselves as a premier brewer. However, I’m not sure that is entirely fair given their excellent products. Long story short,I look to be as objective as possible for this review and have been looking forward to this bottle for some time. I don’t even think it is in season right now! Let’s pour!

Aroma 10/12: A much, much richer aroma than the typical sweet red ale. A round caramel is first, but not foremost. Eventually it blends with a biscuity malt that slowly shows its more roasty tones and the slightly sour note that malt sometimes lends. For a moment, I could have sworn I felt a little warmth, but not smelled it, though that would seem extremely odd for the style. There is also a spice that is barely on the edge of perception.

Appearance 3/3: While primarily a dark copper/nectarine color, this beer has more changing colors than a “tiger’s eye” stone. Colas, coppers, reds, rubies, and dusky oranges make this a veritable sunset of reds in this higher clarity beer. I highly recommend holding the glass out in front of you and moving it about to see the different shades it produces. The head is beige, slightly smaller than average, wet, and dense.

Flavor 17/20: Starting out light, the beer quickly introduces the roasty malts and fades wonderfully into the beer’s main structure. The backbone shows an instant of raw sugar, but then proceeds into the rich caramel from the aroma. The sour from the aroma is also here and is clearly the hops, not the malt as stated earlier. It is far too pronounced to be attributed to malt. The sour is too overshadowed by the malt to be attributed to any particular citrus, but it does make its presence known. The finish really shows the light malts from the beginning with the sweet taste of cream, before fading into an excellent hop bitter with the caramel in the distance. The aftertaste is earthy yet includes the bitter and the roast flavors; all traces of sweetness have faded completely. All of these are moderate in intensity, as one would expect from a normal red ale. Very nice in balance, maturity of flavors, and subtlety.

Mouthfeel 4/5: It has a much lighter body than one might expect. Though given the nuance of the rest of the beer’s characteristics, one should not expect to be bowled over with a big, full body. Adequate carbonation, right down to the very end, and a insinuation of creaminess help make this a more substantial offering of the style.

Overall Impression 8/10: Excellent aroma and a balanced flavor show again why New Glarus is a superior brewer. Those two things alone let this red ale stand head and shoulders above many other offerings of its kind. Add to that a beautiful colors and a more substantial body and you’ve got yourself a winner.

Total 42/50: I feel like I have been rating a lot of beers very highly lately, so I was really looking for places to make sure I was not being too generous. This beer did not allow me to do that. So many brewers fall into the pitfall of giving you a malt-laden, sweet, unbalanced beer and calling it a red, just because it’s the right color. This beer, while not containing über-intense flavors, is so well made that to give it a lesser ranking is to do it a disservice. It is a balanced, drinkable, tasty red ale that should be acceptable to both experienced and rookie craft beer drinkers. You shouldn’t feel bad about picking up a sixer to drink casually around the house.

Angry Orchard Cider House Collection Is Bringing It To The Next...