Ultimately, Rock Band 4 was the driving force behind my getting an Xbox One, but this game was a close second. You simply don’t get games as great as Arkham Asylum and Arkham City everyday, so with the announcement of Arkham Knight, there was no question that I would need to find a way to play it at some point. How could it not be amazing?

The Set-up:
You are Batman. The Dark Knight. Hunting dangerous and deadly villains by the light of the moon. After taking down the Joker (along with virtually every other foe in Batman’s rogue gallery) in Arkham Asylum and Arkham City, you find yourself tasked with stopping Scarecrow on Halloween. His plan? To flood Gotham with a new fear gas and bring an end to you. With Gotham evacuated save for thugs and villains, the city becomes your massive playground.

The Story:
At the end of Arkham City, the Joker dies. This is extremely important to Arkham Knight as it leaves a void in Batman (he and the Joker are essentially a balance of good and evil, this isn’t a deep secret). Also, it becomes clear a bit into the game that Batman was infected with the Joker’s toxic blood in Arkham City, and is suffering hallucinations of the Clown Prince of Crime, including a fear that he will turn into a Joker-esque figure. This is only strengthened by exposure to the Scarecrow’s fear toxin.

John Noble will always be Walter to me. #Fringe

Speaking of, Scarecrow is the big bad of Arkham Knight. As noted above, he is threatening Gotham with a new fear toxin, and has also planted bombs around the city, leading to the evacuation referenced above. He also manages to kidnap Oracle early on in the game, leading to a new urgency for Batman to track him down. The Scarecrow has always been one of my favorite villains, and he is genuinely creepy in this game, thanks in no small part to John Noble’s absolutely brilliant voice work. It is downright chilling.

Also, because all of this isn’t enough for the Dark Knight, a new villain, in the employ of the Scarecrow, has risen. Going by the name of the Arkham Knight, this character essentially comes across as a militaristic psycho. Very visceral and brutal, he is an evil Batman, a well trained madman with no conscious. His identity remains a mystery for the bulk of the game, but those who are familiar with Batman storylines and pay attention to the clues within the game will most likely figure out who the mystery man is (I did, though it didn’t take away from the storyline). 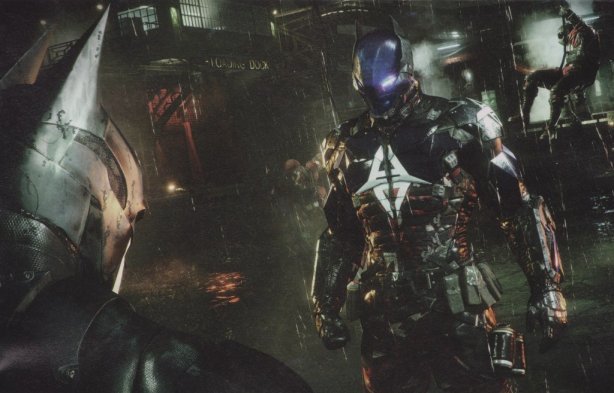 Had it been a Red “A,” this would have been an entirely different game.

In addition to the Scarecrow and the Arkham Knight, other villains such as the Penguin, Two-Face, and Mr. Freeze make appearances, though some are only available via the purchase of DLC. The stories behind each of the other villains are fairly short, but that is to be expected, and was the case in the past Arkham games. In regards to the DLC, the stories flow seamlessly into the main game, and become available as you reach certain percentages of completion.

The Gameplay:
This is the bread and butter of the Arkham games. Rocksteady managed from the beginning to give Batman a combat style that is both deep and easily mastered. No easy task. That hasn’t changed in Arkham Knight. Just as in the past, you can fight with punches and kicks, or delve deeper and use his array of gadgets to take on the various foes. New moves are unlocked by gaining upgrade points (basically, leveling up). For the most part, this is cut and pasted from the previous Arkham games, but that’s most definitely not a bad thing. The combat is superb in those games, so why screw with something that already works? Rocksteady didn’t, and the game benefits because of it.

It’s been a while since I finished off Arkham City, but I do believe that there are a few more gadgets to use in this title. My personal favorite was the one that allowed you to hi-jack drones and screw with other electronically controlled weapons/objects. Causing a drone to blow up on its own operator never got old. My second favorite was the voice distorter. Directing a thug into a trap by imitating their boss gave me far more joy than it should have. I did have some disappointment with the gadgets used in battle. As with another aspect of this game, there almost seemed to be too many to master. Ultimately, I just stuck with a few that I liked and ignored the rest. Also, it sometimes seemed that the trigger for using a gadget just didn’t work. The primary offender for me was the freeze blast. In all fairness, this could have just been me crapping up the controls, but it did seem to happen multiple times.

Seriously, this was pretty cool.

Stealth is also a large part of this game, though it didn’t feel as integral as in the past two games. Rarely will you find yourself in a building where remaining quiet and unseen is an absolute necessity. If you get seen, there is little punishment as you can simply grapple away or go into the vents (though the thugs now drop bombs into the vents if they spot you going into one, which was a nice touch). This is much like the previous games except, again, these areas simply don’t seem as numerous or as important to your current mission. In most cases, I found myself just watching foes from afar, then sneaking up on them when they were alone. I didn’t feel the need to utilize a variety of take downs, sticking to a couple that worked for me. Perhaps I’m simply remembering incorrectly, but I don’t recall it being that easy in the past two games. Now, that said, there are a few areas (recurring mission) that do require absolute stealth, and those are pure joy for those of us that love that element of this series.

There are two major changes that shape Arkham Knight and differentiate it from the previous titles. The first is the sheer size of Gotham City. I’ve read that it’s about five times the size of Arkham City, and I can believe that. There are three main islands that make up the city (only two are available right away), and each has various areas that you will explore. The size of the city is both a blessing and a curse for the game. On a positive note, it provides for quite a bit of variety and makes exploring the game a ton of fun. Also, the city is beautiful. Highly detailed and interesting to explore. Negatively, it sometimes just feels empty and is easy to get lost in. In the past two games, I felt like I got to know the lay of the land. By the end, I didn’t even need a map to know where I was. In this game, I had to rely completely upon the map and waypoint systems. There was just too much for my taste. The islands share some common features, so there never seemed to be any distinguishing styles that allowed you to know exactly where you were just by observing your surroundings. This is a minor quibble, but it just made me feel a bit disconnected from the game.

Secondly, and I believe this aspect was added solely due to the size of the landscape, the Batmobile is present and controllable. For what it’s worth, it is a quick way to travel from place to place, and there are some battles you must undertake in the Batmobile that are quite fun. That said, I never really liked the inclusion of the Batmobile. I prefer grappling from place to place, but the game design clearly discouraged that in favor of driving. Also, the handling of the car is rough at best. You’re never penalized for poor driving, but there are missions where poor handling can screw you up (I’m looking at you Firefly). However, the biggest sin with the Batmobile are the Riddler tracks. These are challenges by the Riddler, in which you must complete three laps around a rigged course with a multitude of traps and pits, many of which are insta-kills. These are, at best, mind-numbing, and I only beat them to advance the Riddler’s story. I just don’t understand why these were added, or why they were ever considered a good idea. They’re the driving equivalents of escort missions. Apparently just there to see how much crap we’ll put up with to complete an otherwise good game.

Outside of the horrible Riddler tracks, the Batmobile isn’t all that bad.

Speaking of the Riddler, his trophies and challenges are back. The challenges, outside of those involving the Batmobile, are pretty fun. Tracking trophies down is, essentially, identical to Asylum and City. Trying to solve his clues however, can be a bit of a pain due to the simple size of the city. Trying to find a specific poster, mildly alluded to in a clue, in a game five times the size of Arkham City can be…challenging. And tiring.

Conclusions:
I think that sometimes I’m just too critical. Or maybe I have far too many expectations of a game. Ultimately, Arkham Knight just didn’t seem as fun as the first two games. Don’t misunderstand me. It’s a very fun, but I did feel that it fell just a bit short of what came before it. Maybe, though, that was always going to be unavoidable. Had this game been the first of the series, I’ve no doubt that I would have thought it was nearly perfect, but it wasn’t the first, and you can only add so much to a sequel. Far too often, parts of this game just didn’t feel as fresh as I had expected. But, again, there was hardly a chance that it could have. It isn’t fresh anymore. Also, when I say I’m disappointed, I mean in a Temple of Doom versus Last Crusade way. At the end of the day, Indiana Jones movies are still better than most any other movie out there, and like those, Arkham Knight is still heads and shoulders above many, many other games.

Let me say this. If you enjoyed the first two games, you will love this game. For all of the criticisms I’ve pointed out above, I played the game nearly non-stop until I had finished it. You don’t do that with a game that’s not great. A game that’s actually stellar. I’m harder on it because it’s already established itself as a franchise that I’m a huge fan of. I’m going to pick it apart far more than if it were another mundane Sonic game (side note: don’t ever play Sonic Lost World…holy cow). The Arkham series deserves a ton of praise, and this game is a part of that. For all the issues I’ve raised above, they are but small issues in an otherwise wonderful gaming experience. 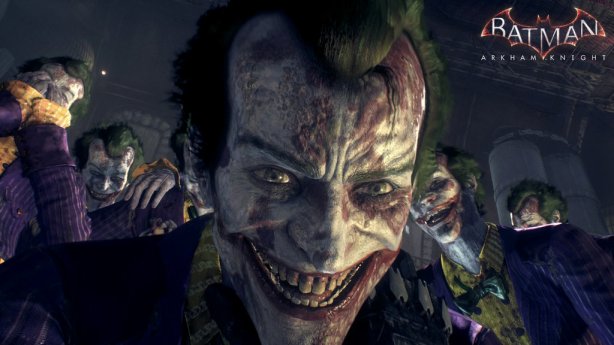