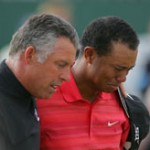 It looks like Elin Nordegren has agreed to move back in with Tiger Woods in their Isleworth, Fla., home. People magazine reports Elin will be moving back in sometime this week. It is also reported that Elin is afraid of going near Tiger romantically.

I would imagine the reportedly gifted golfer will be working on his long game by himself for a while. It goes without saying there is a lot of work that needs to be done with this relationship. “I call them the divorced married couple,” a source told People Magazine.

Donald Trump was recently interviewed and gave Tiger the advice. “I have a whole question as to whether they should even get back together. It’s so damaged and if the reports are just half true, I would recommend Tiger just call it a bad experience, say bye-bye, go out, be a wonderful playboy, win tournaments and have a good life. I think the whole concept of them getting together is not in the best interest necessarily of either one. “

I have to agree with Trump I think this marriage is beyond repair. The bottom line is Tiger Woods cheats on his wife with the fervor he play a golf tournament. So to recap Tiger’s dalliances here is a look at Tiger’s dirty dozen, a photo recap of his mistresses. We threw in a shot of Elin just for good measure.